Skip to main content
Astrology and Religion Among the Greeks and Romans
By: Franz Cumont
Stock No: WW524541 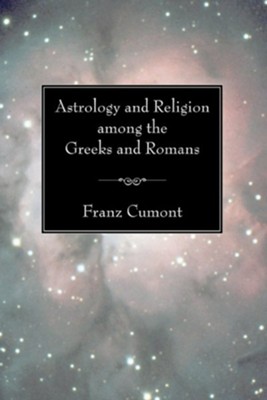 Astrology and Religion Among the Greeks and Romans

▼▲
It is not, however, because it is combined with scientific theories, nor because it enters into the teaching of pagan mysteries, that astrology forces itself on the meditations of the historian of religions, but for its own sake . . ., because he is obliged to enquire how and why this alliance, which at first sight seems monstrous, came to be formed between mathematics and supersitition. . . . How could this absurd doctrine arise, develop, spread, and force itself on superior intellects for century after century? There, in all its simplicity, is the historical problem which confronts us. -from the Introduction Contents Introduction 1. The Chaldeans 2. Babylon and Greece 3. The Dissemination in the West 4. Theology 5. Astral Mysticism. Ethics and Cult 6. Eschatology Franz Cumont (1868-1947) was a Belgian archaeologist, linguist, and historian of ancient religions. He was Professor at the University of Ghent and later curator of the Brussels Royal Museum. His major works include 'The Mysteries of Mithra, ' 'The Oriental Religions in Roman Paganism, ' and 'After Life in Roman Paganism.'

▼▲
I'm the author/artist and I want to review Astrology and Religion Among the Greeks and Romans.
Back