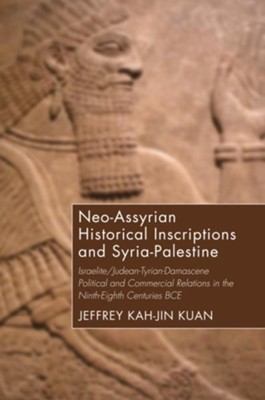 ▼▲
This dissertation investigates the political and commercial relations among Israel/Judea, Aram-Damascus, and Tyre/Sidon in the ninth and eighth centuries BCE. The work focuses primarily on Assyrian historical inscriptions from the period, while non-Assyrian sources, including biblical material, is treated where it supplements the Assyrian sources. ""The republication of Jeffrey Kah-Jin Kuan's Neo-Assyrian Historical Inscriptions and Syria-Palestine is a most welcome event in the fields of biblical and ancient Near Eastern studies. Employing a careful philological and illuminating contextual analysis of the relevant inscriptions, Kuan demonstrates how the Assyrian monarchy, often employing local figures, developed an effective administrative structure to rule the nations and peoples conquered during the course of its imperial subjugation of Western Asia. A must-read for scholars and students in the field."" --Marvin A. Sweeney, Claremont School of Theology and Academy for Jewish Religion California ""Jeffrey Kah-Jin Kuan's Neo-Assyrian Historical Inscriptions and Syria-Palestine was immensely useful when it first appeared in 1995 and it has retained its utility and significance despite the fact that it has long been out of print and hard to find. This reprinted edition is a most welcome development, then, and scholars will find themselves once again in Kuan's debt for his careful presentation of the evidence pertaining to Israelite/Judean relations from the reign of Shalmaneser III through Shalmaneser V."" --Brent A. Strawn, Professor of Old Testament, Emory University Jeffrey Kah-Jin Kuan is President and Professor of Hebrew Bible at Claremont School of Theology, Claremont, California. He holds the PhD from Emory University, MTS from Southern Methodist University, and BTh from Trinity Theological College, Singapore. He is an Old Testament editor of The New Interpreter's Dictionary of the Bible (2006-9) and the coeditor of Ways of Being, Ways of Reading: Asian American Biblical Interpretation (2006).

▼▲
I'm the author/artist and I want to review Neo-Assyrian Historical Inscriptions and Syria-Palestine.
Back