Skip to main content
CUSTOMER APPRECIATION SALE: Thousands of starry deals through 6/22!
The Assurance of Our Salvation (Studies in John 17): Exploring the Depth of Jesus' Prayer for His Own - eBook
By: D. Martyn Lloyd-Jones
Stock No: WW77359EB 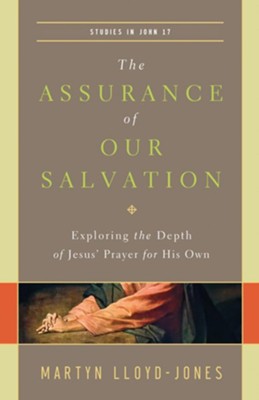 The Assurance of Our Salvation (Studies in John 17): Exploring the Depth of Jesus' Prayer for His Own - eBook

▼▲
Known as the 'Thursday night discourse' chapters 13-17 in the gospel of John constitute what is perhaps the most intimate teaching of the disciples by Jesus. But chapter 17 is of particular interest because it records an the most intimate interaction--a prayer--between Jesus and God the Father. It is striking, revealing, and intense.

Martyn Lloyd-Jones, widely regarded as one of the finest and intense expositor's of the Bible is perhaps the ideal preacher, for unpacking and opening up this prayer both to our hearts and our minds. In The Assurance of our Salvation: Exploring the Depth of Jesus Prayer for His Own Martyn Lloyd-Jones provides his customary verse-by-verse exposition of John 17 and in doing so lays before us the richness, the depth, the wonder--and teh assurance--of God's plan of salvation.

Just hours before his betrayal and arrest, Jesus offered his famous High Priestly Prayer—one of the most intimate moments between Christ and his Father recorded in Scripture. John 17 has thus greatly encouraged Christians for millennia as it boldly affirms our connection to Christ.

In this masterful, verse-by-verse exposition of Jesus’s words, renowned Bible teacher and preacher Dr. Martyn Lloyd-Jones lays before us the richness, the depth, the wonder—and the assurance—of God’s plan of salvation.

Martyn Lloyd-Jones (1899-1981), minister of Westminster Chapel in London for 30 years, was one of the foremost preachers of his day. His many books have brought profound spiritual encouragement to millions around the world.

▼▲
Dr. Lloyd Jones' preaching was based on deep reading and scholarship, yet ot was accessible to everyone. It was close, instructive exposition, yet it stirred the affections and changed the heart. It was highly effective at a city-center in a secularizing society, but it has had broad, worldwide appeal. The doctor's preaching ministry is, I believe, unique in the English speaking world during the last hundred years.
-Timothy Keller

Martyn Lloyd-Jones was one of the titanic figures of twentieth-century Christianity. What now sets him apart is the fact that his writings, sermons, and other messages are even more influential now, more than two-decades after his death, than when he engaged such a massive ministry at Westminster Chapel and beyond. Why? I think the answer is simple: his profound commitment to biblical exposition and the great skill with which he preached and taught the word of God. In an age when so many preachers seem so unsure of what preaching is, in Lloyd-Jones we fuind a minister who leaves no doubt.
-R. Albert Mohler Jr.

Martyn Lloyd-Jones was one of God's special gifts to the church in the twentieth-century.
-Mark Dever

Martyn Lloyd-Jones was without question the finest biblical expositor of the twentieth-century. In fact, when the final chapter of church history is written, I believe he will stand as one of the greatest preachers of all time. His style of biblical exposition was meticulously thorough and yet full of energy. 'Logic on fire' was his famous description of preaching, and he had an amazing gift for blending passion and precision in copious measures. He influenced countless preachers (myself included), and he stood steadfastly against the superficial, entertainment-oriented approach to preaching that seemed to dominate the evangelical world then as it does now. Lloyd-Jones still desperately needs to be heard today.
-John MacArthur

I regarded Martyn Lloyd-Jones with admiration and affection during the years that we were both preaching in London, so I am delighted that his unique ministry is to be more widely available in the United States.
-John Stott

The preaching and subsequent writing of Martyn Lloyd-Jones have been and continue to be a huge source of inspiration in my own life and ministry.
-Alistair Begg

Martyn Lloyd-Jones was one of the greatest preachers of a previous generation who rooted his message in God's word. For those wondering how the word applies to life or seeking textually rooted preaching, his ministry provides a solid model. His books and message are worth pondering. His message encourages us to faithfulness. That is commendation enough.
-Darrell L. Bock

From my student days onwards Martyn Lloyd-Jones was a preacher whom I loved to hear for the sheer quality of his biblical expositions and his stance for evangelical Christianity. It is good to know that efforts are being made to introduce him to a new generation.
-I. Howard Marshall

Martyn Lloyd-Jones was one of teh great expository preachers of teh Bible in his era. His expositions over many months on Romans are in fact the stuff of legend. Few preachers have ever better explained what it takes and what it means to do one's exegetical homework before preaching and then bring that information to light and to life in life-changing sermons. May they provide the necessary spur and antidote to those preachers who now think that the art of preaching involves dumbing everything down and over-simplifying things. As Martyn knew, its not a matter of boiling down the gospel, rather its a matter of boiling up the people, teasing their minds into active thought and engagement with the gospel.
-Ben Witherington

▼▲
I'm the author/artist and I want to review The Assurance of Our Salvation (Studies in John 17): Exploring the Depth of Jesus' Prayer for His Own - eBook.
Back
Back