Skip to main content
SPRING CYBER EVENT STARTS NOW: And it's a really BIG deal! Up to 88% off through 5/24>
The Road to Assisi: The Essential Biography of St. Francis: 120th Anniversary Edition - eBook
Edited By: Jon M. Sweeney
By: Paul Sabatier
Stock No: WW49742EB 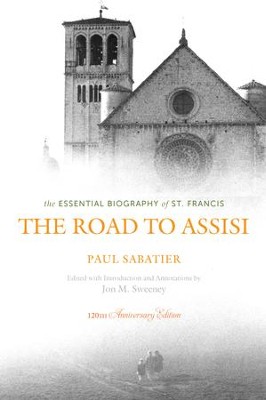 ▼▲
Originally published in French in 1894, Sabatier’s was the first modern biography of Francis of Assisi. It was a worldwide bestseller, and in 2003 when this new edition was first published, it again sold more than 60,000 copies and was a selection of History Book Club. This new 120th anniversary edition includes a dozen additional annotations and a new preface by the editor, putting Sabatier’s influential work into its historical context, showing why it is still the most essential life of the saint.

▼▲
Jon M. Sweeney is an independent scholar, author, and culture critic with a wide range of interests. He is married and the father of three. His 2012 book, The Pope Who Quit: A True Medieval Tale of Mystery, Death, and Salvation was published by Image/Random House, was a History Book Club selection, and optioned by HBO, Inc. Jon has worked in book publishing for 25 years. For many years, he was the vice president of marketing for Jewish Lights Publishing in Vermont, as well as the co-founder and editor-in-chief of SkyLight Paths Publishing. Since 2004, he has been the editor-in-chief of Paraclete Press in Massachusetts. He is the author of many books about Francis and Clare of Assisi including The Road to Assisi, The St. Francis Prayer Book, Light in the Dark Ages: The Friendship of Francis and Clare of Assisi, and published in April 2013: Francis of Assisi in His Own Words: The Essential Writings. He has lectured across the U.S. on subjects related to Francis, including at Washington National Cathedral. He writes often for the Jesuit weekly, America, and blogs on the Religion page of The Huffington Post. Jon grew up in the evangelical Christian town of Wheaton, IL, made famous by Billy Graham, and is featured in the Wheaton volume of Arcadia Publishing’s “Legendary Locals” series. Today he is a Catholic but prays most regularly with his wife, Michal Woll, who is the rabbi of the Ann Arbor Reconstructionist Congregation. They live in Ann Arbor, MI, and have written a book to be published in October 2013 entitled: Mixed-Up Love: Relationships, Family, and Religious Identity in the 21st Century.

▼▲
I'm the author/artist and I want to review The Road to Assisi: The Essential Biography of St. Francis: 120th Anniversary Edition - eBook.
Back
Back