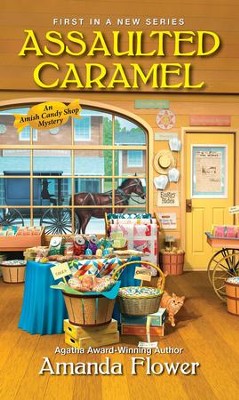 Bailey King is living the sweet life as assistant chocolatier at world-famous JP Chocolates in New York City. But just when Bailey’s up for a life-changing promotion, her grandmother calls with news that her grandfather’s heart condition has worsened. Bailey rushes to Harvest, Ohio, where her grandparents still run Swissmen Sweets, the Amish candy shop where she was first introduced to delicious fudge, truffles, and other assorted delights.

She finds her grandfather is doing better than she feared. Unfortunately, the same can’t be said for a local Englisch developer, whom Bailey finds dead in the candy shop kitchen—with Jebediah King’s chocolate knife buried in his chest. Now the police are sweet on her grandfather as the prime suspect. Despite the sincere efforts of a yummy deputy with chocolate-brown eyes, Bailey takes it on herself to clear Jebediah. But as a cunning killer tries to fudge the truth, Bailey may be headed straight into a whole batch of trouble . . .

▼▲
Amanda Flower, a three-time Agatha Award–nominated mystery author, started her writing career in elementary school when she read a story she wrote to her sixth grade class and had the class in stitches with her description of being stuck on the top of a Ferris wheel. She knew at that moment she’d found her calling of making people laugh with her words. She also writes mysteries as national bestselling author Isabella Alan. In addition to being an author, Amanda is a librarian in Northeast Ohio. Readers can visit her online at www.amandaflower.com.

▼▲
I'm the author/artist and I want to review Assaulted Caramel #1.
Back