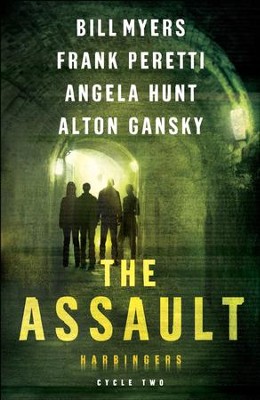 The Assault (Harbingers): Cycle Two of the Harbingers Series - eBook

▼▲
The Next Wave of Stories in the Harbingers Series Arrives

Cycle 2 of the Harbingers series continues the story of four gifted strangers brought together to fight a growing darkness.

In Bill Myers's "The Revealing," the team finds themselves in Rome trying to retrieve the mystical spear Hitler once owned--the very spear that pierced Christ's side. This task will take them from hidden chambers inside the Vatican to a mysterious seaside cave with powers they could never expect.

Frank Peretti's "Infestation" unleashes a microscopic evil on the world that deceives, blinds, kills, then spreads. The Harbingers team must confront a monster bent on seducing and destroying mankind.

In "Infiltration" by Angela Hunt, the team is wounded and barely holding together. Forced to split up, they realize their investigations have led them into dangerous waters.

Alton Gansky's "The Fog" unleashes a supernatural mist unlike any other. There are vicious things in the fog that kill whatever they find. One team member realizes that the ultimate sacrifice may have to be made.

▼▲
A bestselling author and award-winning filmmaker, as well as the co-creator of McGee and Me, Bill Myers's books and videos have sold more than 8 million copies. He lives in California. Learn more at www.billmyers.com.

Frank E. Peretti is one of American Christianity's best-known authors. His novels, including This Present Darkness, have sold more than 10 million copies. He makes his home in Idaho. Learn more at www.frankperetti.com.

With more than 5 million copies of her books sold worldwide, Angela Hunt is the bestselling author of more than 100 works, including the Dangerous Beauty series and Risen: The Novelization of the Major Motion Picture. She resides in Florida. Learn more at ww.angelahuntbooks.com.

Alton Gansky is the author of more than 20 novels. He has won the Angel Award and received the ACFW award for best suspense/thriller for his work on Fallen Angel. He lives in California. Learn more at www.altongansky.com.

▼▲
I'm the author/artist and I want to review The Assault (Harbingers): Cycle Two of the Harbingers Series - eBook.
Back
×
Back
×