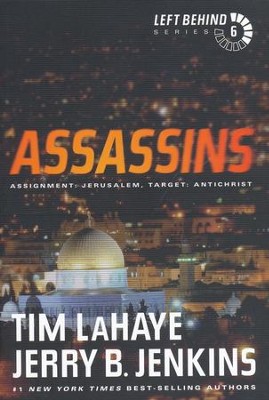 ▼▲
As the halfway point of the 7-year tribulation approaches, Rayford Steele struggles with his desire to assassinate Nicolae Carpathia. Is it part of God's plan? Meanwhile, Carpathia's power is increasing, and he's hunting for the believers' safehouse. Can Buck, Chloe, and Tsion stop him? Includes section on world events that have occurred since the series' release. 480 pages, softcover from Tyndale.

Read the books that launched a cultural phenomenon!

“This is the most successful Christian fiction series ever.”
—Publishers Weekly

“Call it what you like, the Left Behind series . . . now has a label its creators could have never predicted: blockbuster success.”
—Entertainment

Are you ready for the moment of truth?And that’s just the beginning . . .
of the end of the world.

The 12 books in the series by New York Times best-selling authors Tim LaHaye and Jerry B. Jenkins cover the events of biblical prophecy surrounding the rapture and the seven-year period known as the tribulation that follows.

Assassins: Assignment: Jerusalem, Target: Antichrist
The members of the Tribulation Force face their most dangerous challenge. As international fugitives, they struggle to find supplies for safe houses around the world. In despair over so many lost lives, Rayford Steele and Buck Williams make plans to dethrone Nicolae Carpathia and expose his plan to become the ruler of the world. Many believers want him stopped, but who will fulfill Scripture and help bring about the Antichrist’s death?

▼▲
I'm the author/artist and I want to review Assassins, Left Behind Series #6 (rpkgd).
Back
Back