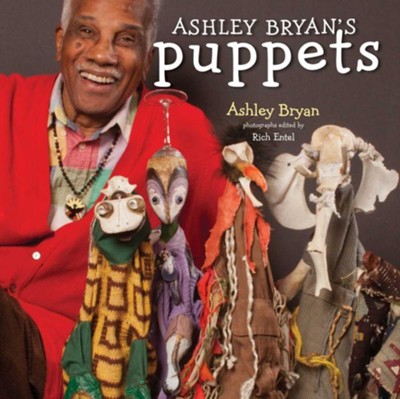 Ashley Bryan's Puppets: Making Something from Everything

By: Ashley Bryan
Illustrated By: Ashley Bryan
Atheneum Books for Young Readers / 2014 / Hardcover
Write a Review
In Stock
Stock No: WW487284
Buy Item Our Price$19.99
In Stock
Quantity:
Stock No: WW487284
Atheneum Books for Young Readers / 2014 / Hardcover
Quantity:
Add To Cart
of These in Your Cart

Little Cranberry Island. It’s a small island, with fewer than a hundred inhabitants, but it’s got more than its share of treasures—including the magnificent Ashley Bryan himself, a world-renowned storyteller and author of such classics as All Night, All Day and Beautiful Blackbird. Daily, for decades, Ashley has walked up and down the beach, stopping to pick up sea glass, weathered bones, a tangle of fishing net, an empty bottle, a doorknob. Treasure.

And then, with glue and thread and paint and a sprinkling of African folklore, Ashley breathes new life into these materials. Others might consider it beach junk, but Ashley sees worlds of possibilities.

Ashley Bryan’s two-foot-tall hand puppets swell with personality and beauty, and in this majestic collection they make their literary debut, each with a poem that tells of their creation and further enlivens their spirit.

▼▲
Ashley Bryan (1923–2022) grew up to the sound of his mother singing from morning to night, and he shared the joy of song with children. A beloved illustrator, he was named a Newbery Honoree for his picture book, Freedom Over Me. He also received the Coretta Scott King—Virginia Hamilton Lifetime Achievement Award; the Laura Ingalls Wilder Award; was a May Hill Arbuthnot lecturer; a Coretta Scott King Award winner; and the recipient of countless other awards and recognitions. His books include Freedom Over Me; Sail Away; Beautiful Blackbird; Beat the Story-Drum, Pum Pum; Let It Shine; Ashley Bryan’s Book of Puppets; and What a Wonderful World. He lived in Islesford, one of the Cranberry Isles off the coast of Maine.

▼▲
A riveting collection of puppets made from found objects at the seashore. Coretta Scott King–Virginia Hamilton Lifetime Achievement winner Bryan here presents the uncanny fruit of over 50 years of artistry and beachcombing. A child of the Depression, Bryan early on developed a penchant for collecting cast-off items from New York City sidewalks. As an adult, when walking the shores of Maine’s Little Cranberry Island, he does the same, now turning much of his seaside bounty into the more than 30 hand puppets captured here in exquisite detail by photographer Hannon. Not only do shells, sea glass and driftwood find new life in Bryan’s African folklore–inspired creations, but bits of net, marbles, thumbtacks, gloves, twine, all kinds of bones, watchbands, forks, fur and a bedpost—not to mention the occasional button—and more amazingly transform into appendages and accessories. As if his wildly fashioned creatures don’t have enough character, Bryan gives each of his puppets a name and poem describing both what it’s made from and its vision. Says the shamanlike Spirit Guardian: “We are born of cast-off pieces / And, like magic, brought alive / By your own imagination. / That’s the gift / By which we thrive.” A stunning work of creative genius sure to captivate the young and lend pure delight to beachcombers of any age. (Picture book/poetry. 4 & up) -- May 2014

Bryan (Can't Scare Me!) shows off another side of his artistry in this enchanting photographic tour of more than 30 puppets he has fashioned out of the flotsam and jetsam he finds on the beach around his Maine island studio. Sticks and bleached bones are fashioned into heads and bodies, scraps of old clothing become long robes, and frayed rope and mops become hair. Gaunt, angular, and haunting, there's nothing toylike about Bryan's creations. They could be sorcerers or shamans—or they might be found leaning against the bar of the cantina in Star Wars. Hannon photographs each puppet on its own spread, each bearing its own (often African) name, epithet ("Lubangi, Born in Water"; "Chipu, Gift"), and poem. Several spreads show groups of puppets lined up, suggesting that Bryan thinks of them as a group, a clan, united by a shared vision. Babatu has a head of smooth carved wood and a jaunty mustache of wiry straw. "I'm peacemaker," he explains, "Trained, wise counselor./ Should any conflicts start,/ I listen to their stories/ Till we're one in mind and heart." The Spirit Guardian's head of white bone suggests a horse; he's draped in a ceremonial robe of white. "My family of puppets/ Freely seek me and call./ I'm their Spirit Guardian,/ I watch over them all." The close-up photographs allow readers to see how the puppets are made and contain an implicit invitation for them to create puppets of their own. Bryan speaks of seeing possibilities in that which others consider trash: "When you close this book/ And look up,/ You'll see puppets everywhere." But the book is just as valuable as a portrait of an artist of color who is true to his own vision and who finds fulfillment doing the work he wants to do. "Artists are heroes," writes Nikki Giovanni in a short afterword. "They lay their emotions like so many plums in the sun to be dried by the light of truth and caring." Ages 4–up. (July) -- May 5, 2014

Award-winning author and illustrator Bryan has combined his love of art and poetry in this captivating and beautifully designed book. True to the subtitle, Bryan explores puppets made from found objects, including the beach glass, old bottles, weathered wood, and pieces of fishing net, that he has collected on the beaches near his home on Little Cranberry Island, ME. Where others see debris, Bryan sees a treasure of stories. Using paint, glue, and string, he crafts the characters of folklore and weaves his poetry around them. Threads of African folktales are infused with the spirit of these puppets. In two-page spreads, photographer Hannon provides both full-page and close-ups of each of the more than 30 puppets created by Bryan. The puppets are about two feet tall, and they are dressed in the colors and shapes of the natural “found treasures.” Bryan deftly uses these objects to create characters that speak in well-crafted, first-person narrative poems. String becomes the spider web woven by Anansi the trickster; wishbones become the moustache of Natambu, Man of Destiny; and sea glass, shells, and starfish embellish Lubangi, Born of Water. Traditional African themes abound as the characters introduce themselves through their poems, and readers are invited into the world of puppets and poetry. Bryan has truly created a book for all to treasure.–Carole Phillips, Greenacres Elementary School, Scarsdale, NY -- July 2014

▼▲
I'm the author/artist and I want to review Ashley Bryan's Puppets: Making Something from Everything.
Back