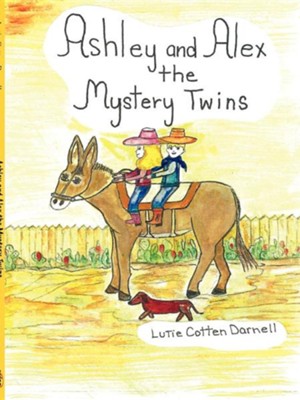 Ashley and Alex the Mystery Twins

▼▲
Ashley Stratford's goal is to be a private detective, and her imaginary twin brother Alexander aspires to be a veterinarian. Ashley, an only child, always looks for the mystery in every situation, and Alex has a natural gift with animals. Together, they form a compatible team as they track down the Broomstick Burglar with the help of Jake the crow and Nate Simmons, a retired policeman; are kidnapped by two convicts and held in a cave until they are rescued by Cockleburr the donkey; protect Christine from a mysterious secret admirer at the large university where she lives in their grandmother's boarding house; and captures three spies stealing secret U.S. scientific documents from the university with the aid of Professor the duck and the FBI. The author, Lutie Cotten Darnell, grew up in Austin Texas, and was the epitome of Ashley Stratford, being an only child and having an imaginary twin brother. Many of the ideas for the stories came from real life situations in her background. She is married to Rev. Dr. J. Millen Darnell, a retired minister, and for thirty-three years has lived in Germantown, Tennessee. Both are very proud of their five adult children and spouses, and especially the four grandchildren, Katy and James Cotten and Julia and Hank Comer. jdarnell@bellsouth.net

▼▲
I'm the author/artist and I want to review Ashley and Alex the Mystery Twins.
Back