Skip to main content
SPRING CYBER EVENT STARTS NOW: And it's a really BIG deal! Up to 88% off through 5/24>
Ashes: A heart-wrenching tale of friendship, war and courage.
By: Chris de Vinck
Stock No: WW0111986 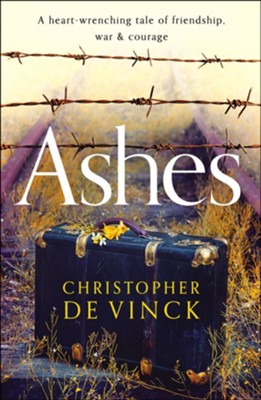 Ashes: A heart-wrenching tale of friendship, war and courage.

A deeply touching novel about two young women whose differences, which once united them, will tear them apart forever, during Hitler’s Nazi occupation of Belgium and France. Based on true events.

For fans of All The Light We Cannot See and Tattooist of Auschwitz.

Belgium, July 1939: Simone Lyon is the daughter of a Belgium national hero, the famous General Joseph Lyon. Her best friend Hava Daniels, is the eldest daughter of a devout Jewish family. Despite growing up in different worlds, they are inseparable.

But when, in the spring of 1940, Nazi planes and tanks begin bombing Brussels, their resilience and strength are tested. Hava and Simone find themselves caught in the advancing onslaught and are forced to flee.

In an emotionally-charged race for survival, even the most harrowing horrors cannot break their bonds of love and friendship. The two teenage girls, will see their innocence fall, against the ugly backdrop of a war dictating that theirs was a friendship that should never have been.

Christopher de Vinck is a teacher and the author of eleven books and numerous articles and essays for publications such as the Wall Street Journal and Reader’s Digest. He delivers speeches on faith, disabilities, fatherhood, and writing, and has been invited to speak at the Vatican. He is the father of three and lives in New Jersey with his wife.

His essays on everyday life have been published in the Wall Street Journal, The New York Times, USA Today, Reader’s Digest, Good Housekeeping, The Chicago Tribune, The Dallas Morning News, The National Catholic Reporter, and used in high school and college textbooks as samples of good writing.

He has won two Christopher Awards, which celebrates authors whose work looks at the ’highest values of the human spirit’. His essays have been selected three times for ’Best Column’ by the National Catholic Press Association. His essay The Power of the Powerless praised by, among many others President Ronald Reagan, was selected by Christianity Today as one of the ten ’Best Biographies and/or Autobiographies’ of this past century, which also included the works of C.S. Lewis, Thomas Merton, and Aleksandr I. Solzhenitsyn.

▼▲
I'm the author/artist and I want to review Ashes: A heart-wrenching tale of friendship, war and courage..
Back
Back