Skip to main content
OUR BIGGEST BARGAIN SALE EVER: Over 6,000 deals at never-seen-before prices ~ through 8/23. Shop now >
Ashamed of Joseph: Mormon Foundations Crumble - eBook
By: Steven A. Crane, Charles A. Crane
Stock No: WW108566EB 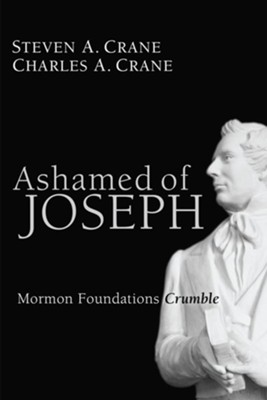 ▼▲
Mormon Prophet and Tenth President, Joseph Fielding Smith, once said: Mormonism, as it is called, must stand or fall on the story of Joseph Smith. He was either a prophet of God, divinely called, properly appointed and commissioned, or he was one of the biggest frauds this world has ever seen. There is no middle ground. If Joseph Smith was a deceiver, who willfully attempted to mislead the people, then he should be exposed; his claims should be refuted, and his doctrines shown to be false . . . The doctrines of false teachers will not stand the test when tried by the accepted standards of measurement, the Scriptures. --Doctrines of Salvation, 1:188. Brigham Young, Prophet and Second President offered this challenge: Well, now examine the character of the Savior, and examine the character of those who have written the Old and New Testament; and then compare them with the character of Joseph Smith, the founder of this work . . . and you will find that his character stands as fair as that of any man's mentioned in the Bible. We can find no person who presents a better character to the world . . . than Joseph Smith. --Journal of Discourses, Vol. 14, p. 203. Combining their research in Mormonism to author this work, Charles A. Crane and his son, Steven A. Crane, would like to accept the challenge and show why many, even among the LDS faith, are Ashamed of Joseph.

▼▲
Charles A. Crane (DMin, Luther-Rice Seminary) has written numerous books and articles on this subject, including, Christianity & Mormonism. He served as President of Boise Bible College for nearly two decades. Steven A. Crane (DMin, Gordon-Conwell Theological Seminary) has written numerous articles and books including Is Mormonism Now Christian? and Marveling with Mark. He serves as the Senior Minister at Eagle Christian Church.

▼▲
I'm the author/artist and I want to review Ashamed of Joseph: Mormon Foundations Crumble - eBook.
Back
Back