Skip to main content
CUSTOMER APPRECIATION SALE: Thousands of starry deals through 6/22!
The Ascent of Money: A Financial History of the World, Unabridged Audiobook on CD
Narrated By: Simon Prebble
By: Niall Ferguson
Stock No: WW110339 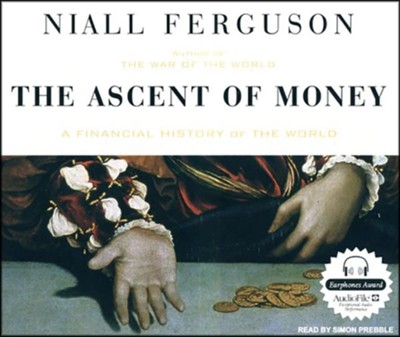 The Ascent of Money: A Financial History of the World, Unabridged Audiobook on CD

▼▲
Bread, cash, dough, loot, moolah, readies, the wherewithal: Call it what you like, it matters. To Christians, love of it is the root of all evil. To generals, it's the sinews of war. To revolutionaries, it's the chains of labor. But in The Ascent of Money, Niall Ferguson shows that finance is, in fact, the foundation of human progress. What's more, he reveals financial history as the essential back story behind all history.Through Ferguson's expert lens, familiar historical landmarks appear in a new and sharper financial focus. Suddenly, the civilization of the Renaissance looks very different: a boom in the market for art and architecture made possible when Italian bankers adopted Arabic mathematics. The rise of the Dutch republic is reinterpreted as the triumph of the world's first modern bond market over insolvent Habsburg absolutism. And the origins of the French Revolution are traced back to a stock market bubble caused by a convicted Scot murderer.

With the clarity and verve for which he is known, Ferguson elucidates key financial institutions and concepts by showing where they came from. What is money? What do banks do? What's the difference between a stock and a bond? Why buy insurance or real estate? And what exactly does a hedge fund do? This is history for the present. Ferguson travels to post-Katrina New Orleans to ask why the free market can't provide adequate protection against catastrophe. He also delves into the origins of the subprime mortgage crisis.

Perhaps most important, The Ascent of Money documents how a new financial revolution is propelling the world's biggest countries, India and China, from poverty to wealth in the space of a single generation---an economic transformation unprecedented in human history.Yet the central lesson of the financial history is that sooner or later every bubble bursts---sooner or later the bearish sellers outnumber the bullish buyers; and sooner or later greed flips into fear. And that is why, whether you're scraping by or rolling in it, there's never been a better time to understand the ascent of money.

▼▲
I'm the author/artist and I want to review The Ascent of Money: A Financial History of the World, Unabridged Audiobook on CD.
Back
Back