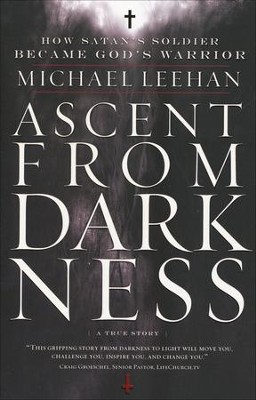 ▼▲
The redemptive story of one man's journey from Satanism to a radical new life in Christ! Learn how the worst decision of Leehan's life---to make a pact with the devil---led to ritualistic sacrifices, detachment, incarceration, and misery. But God thwarted Leehan's demonic "assignment"---to murder his pastor---and flooded his life with grace! 256 pages, softcover from Nelson.

▼▲
Michael Leehan is an evangelist and minister, but he's also finally a free man. Once enslaved to the dark forces of this world he now lives each day in devotion and service to God through Solus Christus Ministries, a nonprofit organization that offers hope and redemption through the power of God's love, truth, and knowledge of His Word. This is his first book.

▼▲
The redemptive story of one man's agonizing journey from the depths of Satanism to a radical new life in Christ.

A life of difficulty and disappointment set 33-three year old Michael Leehan up for the worst decision of his lifeto make a deal with the Devil to follow and serve him. Practicing the dark arts that include ritualistic cuttings and blood sacrifices, while fine tuning his manipulation and control skills, Michael launched into a twenty year downward spiral that included job loss and detachment from loved ones, and even jail time.

But God had another plan that included a group of Christian men to love him and pray for himeven when it became evident his assignment from Satan was to kill their pastor, Craig Groeschel.

The life Michael Leehan lives today is an incredible testimony of the transforming power of God's mercy and grace, but is also a wakeup call to the church to be fully aware of the spiritual war that is going on all around them, and to the ultimate battle for their souls.

"I am sending you to open their eyes and turn them from darkness to light, and from the power of Satan to God, so that they may receive forgiveness of sins and a place among those who are sanctified by faith in me." Acts 26:18

▼▲
I'm the author/artist and I want to review Ascent from Darkness: How Satan's Soldier Became God's Warrior.
Back
Back