Skip to main content
SPRING CYBER EVENT STARTS NOW: And it's a really BIG deal! Up to 88% off through 5/24>
As You Like It - eBook
By: William Shakespeare
Stock No: WW63560EB 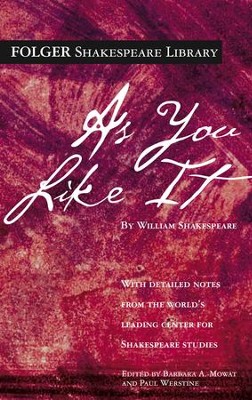 ▼▲
Readers and audiences have long greeted As You Like It with delight. Its characters are brilliant conversationalists, including the princesses Rosalind and Celia and their Fool, Touchstone. Soon after Rosalind and Orlando meet and fall in love, the princesses and Touchstone go into exile in the Forest of Arden, where they find new conversational partners. Duke Frederick, younger brother to Duke Senior, has overthrown his brother and forced him to live homeless in the forest with his courtiers, including the cynical Jaques. Orlando, whose older brother Oliver plotted his death, has fled there, too.

Recent scholars have also grounded the play in the issues of its time. These include primogeniture, passing property from a father to his oldest son. As You Like It depicts intense conflict between brothers, exposing the human suffering that primogeniture entails. Another perspective concerns cross-dressing. Most of Orlando’s courtship of Rosalind takes place while Rosalind is disguised as a man, “Ganymede.” At her urging, Orlando pretends that Ganymede is his beloved Rosalind. But as the epilogue reveals, the sixteenth-century actor playing Rosalind was male, following the practice of the time. In other words, a boy played a girl playing a boy pretending to be a girl.

The authoritative edition of As You Like It from The Folger Shakespeare Library, the trusted and widely used Shakespeare series for students and general readers, includes:

The Folger Shakespeare Library in Washington, DC, is home to the world’s largest collection of Shakespeare’s printed works, and a magnet for Shakespeare scholars from around the globe. In addition to exhibitions open to the public throughout the year, the Folger offers a full calendar of performances and programs. For more information, visit Folger.edu.

▼▲
William Shakespeare was born in April 1564 in the town of Stratford-upon-Avon, on England’s Avon River. When he was eighteen, he married Anne Hathaway. The couple had three children—an older daughter Susanna and twins, Judith and Hamnet. Hamnet, Shakespeare’s only son, died in childhood. The bulk of Shakespeare’s working life was spent in the theater world of London, where he established himself professionally by the early 1590s. He enjoyed success not only as a playwright and poet, but also as an actor and shareholder in an acting company. Although some think that sometime between 1610 and 1613 Shakespeare retired from the theater and returned home to Stratford, where he died in 1616, others believe that he may have continued to work in London until close to his death. Paul Werstine is Professor of English at the Graduate School and at King’s University College at Western University. He is a general editor of the New Variorum Shakespeare and author of Early Modern Playhouse Manuscripts and the Editing of Shakespeare and of many papers and articles on the printing and editing of Shakespeare’s plays. Barbara A. Mowat is Director of Research emerita at the Folger Shakespeare Library, Consulting Editor of Shakespeare Quarterly, and author of The Dramaturgy of Shakespeare’s Romances and of essays on Shakespeare’s plays and their editing.

▼▲
I'm the author/artist and I want to review As You Like It - eBook.
Back
Back