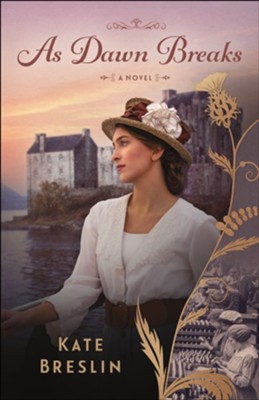 ▼▲
After a deadly explosion at her munitions factory kills her best friend, Rosalind longs to escape and begin a new life. Armed with a false ID card, she flees to another factory in Scotland. But when RAF captain Alex Baird arrives to investigate and prevent a second blast, things get complicated. Should Rosalind risk telling him everything? 400 pages, softcover from Bethany.

▼▲
Her daring bid for freedom could be her greatest undoing.


Amid the Great War in 1918 England, munitions worker Rosalind Graham is desperate to escape the arranged marriage being forced on her by her ruthless guardian and instead follow her own course. When the Chilwell factory explodes, killing hundreds of unidentified workers, Rose realizes the world believes she perished in the disaster. Seizing the chance to escape, she risks all and assumes a new identity, taking a supervisory position in Gretna, Scotland, as Miss Tilly Lockhart.

RAF Captain Alex Baird is returning home to Gretna on a secret mission to uncover the saboteur suspected in the Chilwell explosion, as Gretna's factory is likely next. Fearing for his family's safety, he's also haunted by guilt after failing to protect his brother. Alex is surprised to discover a young woman, Miss Lockhart, renting his boyhood room, but the two eventually bond over their mutual affection for his family--until Alex receives orders to surveil her.

Rose squirms beneath Alex's scrutiny while she struggles to gain her workers' respect. But when her deception turns to danger, she and Alex must find a way to put their painful pasts behind them and together try to safeguard the future.

"Readers will be captivated by this exquisite blend of historical intrigue and heartfelt romance from one of the finest voices in inspirational fiction."--AMANDA BARRATT, author of My Dearest Dietrich and The White Rose Resists


"Breslin uses an exhilarating plotline and tender romance amid the tension of espionage to craft a gripping tale rife with double agents, corrupt foreign arms dealers, and secret missions. Ultimately, this is a story of forgiveness and family, and readers will revel once again in Breslin's superb chronicling of women's vital contributions to the war effort."--Booklist

"Breslin keeps the tension up. . . . The stakes could not be higher--in both love and war--in this espionage tale drenched in intrigue."--Publishers Weekly

▼▲
A Florida girl who migrated to the Pacific Northwest, Kate Breslin was a bookseller for many years. She is a Carol Award winner and a RITA and Christy Award finalist and lives with her husband in Seattle, Washington. Find her online at www.katebreslin.com.

▼▲
I'm the author/artist and I want to review As Dawn Breaks.
Back
Back