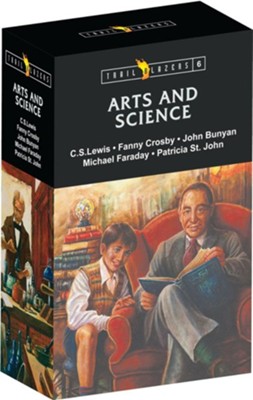 ▼▲
Discover the lives of some of the most influential minds in arts and science with this boxed set from the Trailblazers series. Written for children ages 8 to 12 years, this set of biographies includes titles: C.S. Lewis, Fanny Crosby, John Bunyan, Michael Faraday, and Patricia St. John.

An Exciting and Inspiring Collection of Vividly Told Stories of Christians Who Really Made A Difference.

It may seem at times for some people that there are problems between Art and Science and the Christian Faith, but are there really? Next time you see a lightbulb, a generator, chlorine in a swimming pool or a Bunsen burner, remember it was a Christian who was behind them all – one whose picture hung next to Isaac Newton on Albert Einstein’s wall and who published a scientific book so significant that Melvin Bragg listed it as one of the 12 books that changed the world!

Then there is the soldier who while in prison for just preaching outwith the established Church in the 1700’s, wrote one of the most significant Christian fiction books ever – you’ll certainly have heard of it.

Feel the pain of a little girl born blind – just imagine it – and yet she goes on to write 8000 songs, with 100 million copies printed and many still sung today.

Next, we have an Oxford and Cambridge professor, who introduced us to the Land of Narnia when he wrote The Lion the Witch and The Wardrobe.

Finally, there is the writer who became one of the world’s best loved Christian writers for children, with several of her books made into films. Reading the stories of these artists and scientists you will get a glimpse into how God is at work everywhere.

Michael Faraday was dyslexic but he was still the brains behind the electric light. In this book you will also read about his love for God – his greatest discovery.

John Bunyan fought as a soldier but when he trusted in Christ he faced other conflicts. The preacher and writer had to suffer persecution and be put in prison for his faith.

Fanny Crosby was a little blind girl who grew up to be a talented poet and musician. The hymns she wrote are still being sung today.

C. S. Lewis wrote some of the most famous books in the English language. It also tells the meaning behind the stories he wrote.

Patricia St. John‘s life is a story in itself but she grew up to become one of the world’s best–loved Christian writers for children.