Skip to main content
SPRING CYBER EVENT STARTS NOW: And it's a really BIG deal! Up to 88% off through 5/24>
The Arts and the Christian Imagination: Essays on Literature, Art, and Aesthetics
Edited By: William Dyrness, Keith Call
By: Clyde S. Kilby
Stock No: WW618611 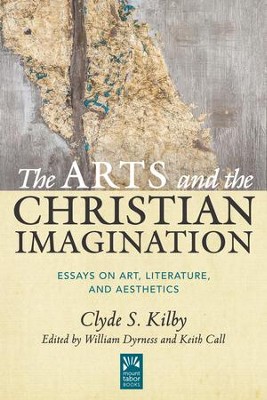 The Arts and the Christian Imagination: Essays on Literature, Art, and Aesthetics

Dr. Clyde Kilby was known to many as an early, long and effective champion of C. S. Lewis, and the founder of the Marion E. Wade Center at Wheaton College, IL, for the study of the works of Lewis, J.R.R. Tolkien and other members of the Inklings. Less known is that Dr. Kilby was also an apologist in his time for arts, aesthetics and beauty, particularly among Evangelicals.

In The Arts and the Christian Imagination, readers are offered a collection of essays that serve as a sampler of Kilby's work on these themes. The reflections contained within fall under four headings: "Christianity, Art, and Aesthetics"; "The Vocation of the Artist"; "Faith and the Role of the Imagination"; and "Poetry, Literature and the Imagination."

With a unique voice and timeless wisdom, Kilby writes from a specific literary and philosophical context that relates art and aesthetics with beauty, and all that is embodied in the classics. His work is particularly relevant today as these topics are being embraced by Protestants, Evangelicals, and indeed people of faith from many different traditions. For readers who want to look more closely at the themes of art, aesthetics, beauty and literature in the context of faith, The Arts and the Christian Imagination provides a deeply engaging and profound touchstone.

▼▲
Clyde Samuel Kilby was an American author and English professor, best known for his scholarship on the Inklings, especially J. R. R. Tolkien and C. S. Lewis. A professor at Wheaton College, IL for most of his life, Dr. Kilby founded the Marion E. Wade Center there, making it a center for the study of the Inklings and their literary companions.

▼▲
"To read the reflections of C.S. Kilby on art and the Christian imagination is to engage one of the most pertinently constructive interior critiques of American evangelical culture in the 1960’s. His biblically formed imagination saw good and truth in what seemed to many of his generation astonishing places—French Catholic philosophers, agnostic novelists, psychic experimentalists, off-beat artists, mathematicians, mentally disturbed poets. To read these essays is to hear again his distinctively gentle voice in the classroom, and once again to gather many pearls of wisdom."
—David Lyle Jeffrey, Distinguished Professor of Literature and the Humanities Honors Program, Senior Fellow, Baylor Institute for Studies in Religion, Baylor University

"The essays collected in The Arts and the Christian Imagination make reference to a broad, at times surprising, swath of thinkers, including French mathematician Henri Poincar&eacute;. Such breadth strengthens Kilby’s call for evangelical Christians to take the arts more seriously. He returns repeatedly to two concepts: metaphor’s importance to aesthetics, and the centrality of the imagination for the individual and for Christianity.... Taken as a whole, Kilby’s writings are jarring for the contemporary reader accustomed to relativism. Kilby is confident that truth exists and that we can go some way in finding it, starting from our acceptance of the Gospel. From this foundation, we set out into an expanded world. That journey needs to include the aesthetic in all its forms. Be bold, he tells us." —Brian Welter, New Oxford Review

▼▲
I'm the author/artist and I want to review The Arts and the Christian Imagination: Essays on Literature, Art, and Aesthetics.
Back
Back