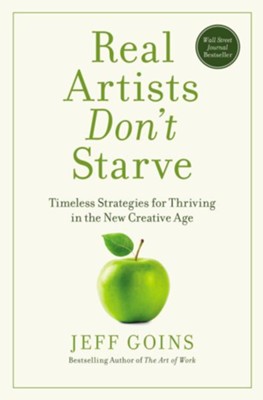 Buy Item Our Price$9.99
3.5 out of 5 stars for Real Artists Don't Starve: Timeless Strategies for Thriving in the New Creative Age - eBook (3 Reviews)
In Stock
Stock No: WW89429EB
HarperCollins Leadership / 2017 / ePub
Add To Cart
of These in Your Cart

By: Jeff Goins
HarperCollins Leadership / 2017 / ePub
3.5 out of 5 stars for Real Artists Don't Starve: Timeless Strategies for Thriving in the New Creative Age - eBook (3 Reviews) Write a Review
In Stock
Stock No: WW89429EB

In Real Artists Don't Starve, bestselling author and creativity expert Jeff Goins dismantles the myth that being creative is a hindrance to success by revealing how an artistic temperament is in fact a competitive advantage in the marketplace.

▼▲
Jeff Goins is a bestselling author, keynote speaker, and popular blogger with a reputation for challenging the status quo. In three years, Goins built a million-dollar business, published four books, and became an online marketing expert, using his skills in writing and business to help others succeed. He is the author of four books, including The Art of Work, which landed on the bestseller lists of USA Today, Publisher's Weekly, and Washington Post. He lives with his family near Nashville, TN.

A Message from the Author

3 Reasons Why Pursuing Your Calling Won’t Be Easy

The first job I ever had, at twelve years old, was delivering newspapers. I had long hair, was overweight, and wore lots of baggy clothes. Puberty was still a few years away, so most masculine features, including facial hair, were nonexistent.

After that first month on the job, I went around town, collecting dues, and one of the last houses was that of an older gentleman whom I had never met before. When he paid me, the man said, “Well, aren’t you an enterprising little lady! I’ll bet you’re going to be an entrepreneur some day.”

Well, he was right about one thing.

This wasn’t the first time I had been mistaken for a girl. In this case, however, I didn’t correct the man. I'm not sure if it was because I was too embarrassed or because he had just paid me, but I let the comment linger. And that was my first mistake. For the rest of the time I delivered that man's paper, I lived with the lie that I was an "enterprising little lady."

Has this ever happened to you? Someone mistakes your name at a party and calls you "John" instead of "Josh" or "Katherine" instead of "Kathleen," and because you didn’t catch it, you have to live with it. Why do we do this? One reason is that it's sometimes easier to live with a lie than embrace the truth about who we really are.

In sixth grade, I wasn’t brave. Unable to face the man, I quit the paper route six months after starting it. This kind of thing kept happening to me throughout my adolescence. It took a long time to realize I didn’t have to assume the identity other people gave me. I could be who I really was without fear of judgment. But it would take a long time before I'd fully grasp that concept.

Not too long ago, I quit my job working for a ministry and became a full-time author. I was able to do this because I believed this wasn't just a career change, but a calling, and because I finally knew who I was, who God created me to be. Through the process of making this transition, I learned a few important lessons.

The world wasn’t just going to acknowledge who I was. I was going to have to believe it before anyone else would. The artist Michelangelo learned a similar lesson. He grew up believing he had been born into nobility, and this belief guided his understanding of himself. When the young man set out to be an artist, a profession that did not possess much prestige at the time, this put him at odds with his father who was determined to see his family name restored to prominence.

Because Michelangelo believed he was an aristocrat, he acted like an artist who deserved respect. "I was never the kind of painter who kept a shop," he wrote, suggesting how different he was from his peers. And because he believed it, he became it. By the end of Michelangelo's life, he was the wealthiest artist of his time, possessing a fortune of nearly $50 million. And the most incredible part is he wasn't actually from nonle lineage. But because he believed it was true, it became true.

Turns out, what we believe about ourselves matters. Another word for this is "faith."

Sometimes, it's easier to assume the role we've been given in life than it is to ask the deep question, "Who am I really?" As trappist monk Thomas Merton writes, "We are not very good at recognizing illusions, least of all the ones we cherish about ourselves."

Many people never become their true selves, because it’s simply more convenient to play the roles we are expected to plan than to embrace our God-given identities. But at a certain point we have to embrace what makes us stand out. We must become comfortable with who we are and uncomfortable with who we are not, regardless of the acclaim it may bring.

Years ago, when I made the decision to become a full-time writer, it was because a friend told me, "If you don't do this, you need to consider the possibility that it might be an act of disobedience to God."

At the time, I was thinking about myself. How would this affect my comfort, my reputation? What would people think of me if I failed? I was more afraid of failure than of disobedience to the call, and that's a dangerous place to be. But upong hearing my friend's rebuke, I quickly became more afraid of not trying than of failing.

"Do not conform to the pattern of this world," Paul writes in Romans 12:2. Anytime we find ourselves following the pack, fulfilling the expectations of the world, we need to step back and ask ourselves if this is what our life should be about.

The world does not always understand the gifts we have to offer. In different seasons of life, we may find ourselves pigeonholed, and in these instances, we must escape. The way we do this is through constant reinvention, never settling with what others expect of us and always striving to become who God made us to be.

Look at Gordon Mackenzie, a member of Hallmark’s Contemporary Design team, which he described as “an unruly, but prodigiously productive stepchild” of a department. Towards the end of his career when he could have simply phoned it in, he dreamed up a place where he and his creative peers could thumb their nose at the growing bureaucracy at Hallmark and still be creative. He called it the Humor Workshop, and to his dismay, his superiors approved the concept. The Humor Workshop became a creative paradise, a place where the team experienced a rebirth within a corporate culture that had grown antagonistic to innovative work.

What do we do when we feel that call to be one thing when the world seems to call us in another direction? We listen to it. We follow it where it takes us, because wherever that is, it is certainly better than standing still. And like Gordon, we reinvent ourselves, if necessary. We become the artists we were meant to be, even if that means doing the unexpected thing, the thing that others will surely disapprove of but in our hearts we know is the right thing. Risking rejection, we stand out, because we know it's better to share our true selves with the world than it is to hide behind a false self.

A calling is a creative act, because it comes from the Creator. This means that in one for or another, we are all artists, creating the life we are meant to live. But sometimes, we must remember, artists are not born. They're made.

So what kind of life are you going to make for yourself, and what will it cost you?

Jeff Goins is the best-selling author of The Art of Work and Real Artists Don’t Starve, which are both for sale wherever books are sold. You can follow Jeff on Twitter @JeffGoins, subscribe to his blog at Goinswriter.com, and learn more about his latest book at dontstarve.com.

▼▲
I'm the author/artist and I want to review Real Artists Don't Starve: Timeless Strategies for Thriving in the New Creative Age - eBook.
Back
Back