Skip to main content
Articles of Faith: A Frontline History of the Abortion Wars
By: Cynthia Gorney
Stock No: WW867478 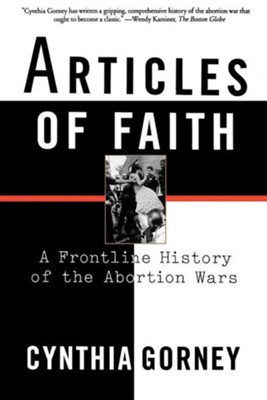 Articles of Faith: A Frontline History of the Abortion Wars

▼▲
Nominated for the Los Angeles Times Book Prize, Articles of Faith is a powerful exploration of one of the most divisive issues in our recent political history, and the only book to portray the passion of both sides of the abortion conflict.

▼▲
Nominated for the Los Angeles Times Book Prize, Articles of Faith is a powerful exploration of one of the most divisive issues in our recent political history, and the only book to portray the passion of both sides of the abortion conflict.
Drawing from more than five hundred interviews as well as previously unseen archival material, Cynthia Gorney has written a compelling narrative that explores the years between Roe v. Wade (1973) and William L. Webster v. Reproductive Health Services (1989), the first case to challenge the Roe decision before an anti-Roe court.
Meet Judith Widdicombe, the registered nurse who runs the abortion underground in 1960s St. Louis and then the first legal clinic after Roe v. Wade. And meet Samuel Lee, a young pacifist and would-be seminarian whose provocative abortion bill becomes the centerpiece of William L. Webster v. Reproductive Health Services. The Supreme Court case brings the two advocates head-to-head.

▼▲
Wendy Kaminer The Boston Globe Cynthia Gorney has written a gripping, comprehensive history of the abortion war that ought to become a classic.
Elizabeth Mehren Los Angeles Times Stunning....Gorney is an exquisite storyteller...[she] makes us care more about the characters than their ideological inclinations. [You'll] find yourself rooting for someone whose position on abortion you'd ordinarily find abhorrent.
Cynthia Leive Newsday A startling empathy for both sides....Vivid detail and grand scope.
Tessa DeCarlo San Francisco Chronicle Gripping narrative...jammed with provocative anecdotes and surprising insights....This beautifully written book uncovers the untidy realities and self-contradictory beliefs and fears lying beneath the rhetoric of absolute right and wrong.
Susan Lydon San Jose Mercury News An amply rewarding journey....Presents both sides of a complex issue and brings it alive through character, detail, context, and a narrative so compellingly written that at times it reads like a novel.
Paul Galloway Chicago Tribune An enthralling, skillfully balanced narrative about this important and complicated national debate.
David J. Garrow The New York Times Articles of Faith illuminates the two distinct faces of the post-Roe drive against abortion, those of protestors and those of legislators. Gorney's portrait of Sam Lee is impressive.
Samuel G. Freedman Newsday In Cynthia Gorney, this subject has at last found its ideal chronicler....Best nonfiction book of 1998. More than that, it is a book that deserves to last for its evenhanded and immensely readable quality....Gorney's reporting, while balanced, is anything but blandly "objective." She brings equal passion, vigor, and empathy to each character, making their battle of principles rage in a reader's brain.
Beryl Lieff Benderly The Washington Post Book World Gorney can write with great power.
Micheal J. Ybarra Los Angles Times The book abounds in poignant detail.

▼▲
I'm the author/artist and I want to review Articles of Faith: A Frontline History of the Abortion Wars.
Back