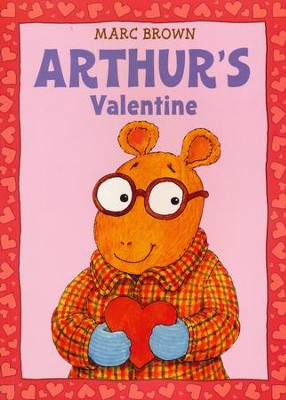 ▼▲
Who is Arthur's secret admirer? It is a real mystery. It might be Fern. It could be Buster playing a joke. Or maybe even Francine. She is always teasing Arthur. Arthur hopes it is the new girl, Sue Ellen. Who ever it is makes Arthur's life miserable...until Arthur neatly turns the tables, proving that he knows how to take a joke and play one as well.

Let Arthur be your perfect valentine! It's almost Valentine's Day, and Arthur can't crack the case on who his secret admirer is. Could it be Fern, or maybe even Sue Ellen? Or is it just Buster playing pranks? Will Arthur solve the mystery, or will he be left holding a broken heart?

▼▲
Marc Brown is the creator of the bestselling Arthur Adventure book series and creative producer of the beloved children's PBS television series, Arthur. He has also created a second book series featuring D.W., Arthur's little sister, as well as numerous other books for children. He is also the illustrator of the popular series Dino Tales: Life Guide for Families with his wife, Laurie Krasny Brown. He lives in New York City and in Tisbury, Martha's Vineyard.

▼▲
Praise for the Arthur series:

* "Sure-fire appeal for the primary grade set, as well as Arthur addict of all ages."
—School Library Journal, (starred review)

"Brown's sweet, colorful illustrations sparkle with humor and child appeal, and his message comes through loud and clear."—Booklist

▼▲
I'm the author/artist and I want to review Arthur's Valentine, Paperback.
Back
×
Back
×