We are OPEN and SHIPPING - click here for shipping estimates
PRE-SUMMER CYBER SALE: Shop over 2,500 items up to 90% off through 5/26 >
Arthur's Christmas
By: Marc Brown 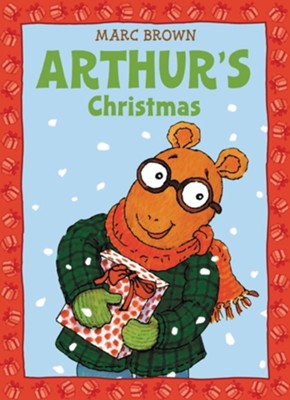 Arthur discovers the spirit of Christmas! Christmas is only days away, and Arthur is taking his Christmas shopping for Santa very seriously. He wants his gift to be absolutely perfect, but with the clock ticking, he might need a little help from his sister, D.W., to make this the best Christmas ever.

▼▲
Marc Brown is the creator of the bestselling Arthur Adventure book series and creative producer of the beloved children's PBS television series, Arthur. He has also created a second book series featuring D.W., Arthur's little sister, as well as numerous other books for children. He is also the illustrator of the popular series Dino Tales: Life Guide for Families with his wife Laurie Kransy Brown. He lives in New York City and in Tisbury, Martha's Vineyard.

▼▲
Praise for the Arthur series:

* "Sure-fire appeal for the primary grade set, as well as Arthur addict of all ages."—School Library Journal, (starred review)

"Brown's sweet, colorful illustrations sparkle with humor and child appeal, and his message comes through loud and clear."
—Booklist

▼▲
I'm the author/artist and I want to review Arthur's Christmas.
Back
×