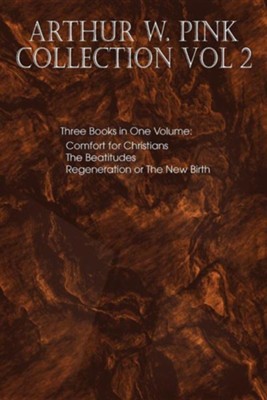 ▼▲
Arthur W. Pink Collection Vol 2 includes three Arthur Pink classics; Comfort for Christians, The Beatitudes, and Regeneration or The New Birth. "The work unto which the servant of Christ is called is many-sided. Not only is he to preach the Gospel to the unsaved, to feed God's people with knowledge and understanding (Jer. 3:15), and to take up the stumbling stone out of their way (Isa. 57:14), but he is also charged to "cry aloud, spare not, lift up thy voice like a trumpet, and show My people their transgression" (Isa. 58:1 and cf. 1 Tim. 4:2). While another important part of his commission is stated in, "Comfort ye, My people, said your God" (Isa. 40:1). "What an honorable title, "My people " What an assuring relationship: "your God " What a pleasant task: "comfort ye My people " A threefold reason may be suggested for the duplicating of the charge. First, because sometimes the souls of believers refuse to be comforted (Ps. 77:2), and the consolation needs to be repeated. Second, to press this duty the more emphatically upon the preacher's heart, that he need not be sparing in administering cheer. Third, to assure us how heartily desirous God himself is that His people should be of good cheer (Phil. 4:4)." "Opinion has been much divided concerning the design, scope, and application of the Sermon on the Mount. Most commentators have seen in it an exposition of Christian ethics. Men such as the late Count Tolstoi have regarded it as the setting forth of a "golden rule" for all men to live by. Others have dwelt upon its dispensational bearings, insisting that it belongs not to the saints of the present dispensation but to believers within a future millennium. Two inspired statements, however, reveal its true scope. In Matthew 5:1, 2, we learn that Christ was here teaching His disciples. From Matthew 7:28, 29, it is clear that He was also addressing a great multitude of the people. Thus it is evident that this address of our Lord contains instruction both for believers and unbelievers alike." Two chief obstacles lie in the way of the salvation of any of Adam's fallen descendants: bondage to the guilt and penalty of sin, bondage to the power and presence of sin; or, in other words, their being bound for Hell and their being unfit for Heaven. These obstacles are, so far as man is concerned, entirely insurmountable. This fact was unequivocally established by Christ, when, in answer to His disciples' question, "Who then can be saved?," He answered, "with men this is impossible." A lost sinner might more easily create a world than save his own soul. But (forever be His name praised), the Lord Jesus went on to say, "with God all things are possible" (Matt. 19:25, 26). Arthur Walkington Pink was an English Christian evangelist and Biblical scholar. Born to Christian parents, prior to conversion he migrated into a Theosophical society and quickly rose in prominence. His conversion came from his father's patient admonitions from Scripture. It was Proverbs 14:12, 'there is a way which seemeth right unto a man, but the end thereof are the ways of death, ' which particularly struck his heart and compelled him to renounce Theosophy and follow Jesus.

▼▲
I'm the author/artist and I want to review Arthur W. Pink Collection Vol 2.
Back