Skip to main content
Art & the Bible for Children
By: Barry Stebbing
Stock No: WW787438 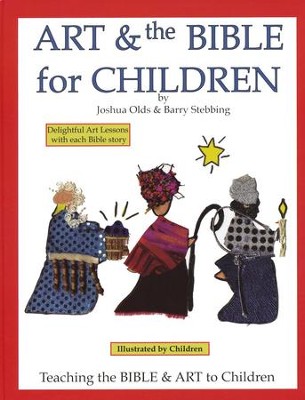 Art & the Bible for Children

Product Close-up Visit the How Great Thou Art Store

▼▲
Your children will be excited to start creating their own biblically-based masterpieces after looking through the artwork in Art and the Bible for Children! Favorite Bible stories are written at an elementary level for each child to understand, while art lessons and discussion questions at the end of each story provide a fun way to reinforce the lesson and basic art skills. Draw and color a nighttime sky from Genesis' creation week, Ruth in Boaz' field, and Jesus in the midst of seven golden candlesticks, as you move from Genesis through Revelation. Illustrated by homeschoolers, the glossy, full-color pages make looking through this book a treat--and serves as inspiration to get drawing! Perfect for homeschool lessons, Sunday Schools, or Christian schools. 275 pages, hardcover. Pages are reproducible for classroom use.

Tell us a little about yourself.  When I co-wrote Art and the Bible for Children (ABC), I was 14 years old and just beginning to flesh out the talent for writing and Biblical exposition that I use now as a Liberty University religion major.

What was your motivation behind this project?  It began as a story submission to Barry Stebbing for inclusion in ABC and ended as a proposal that I write the entire manuscript. I must admit that at the time, the idea was a little overwhelming. My entire motivation for the whole thing was to put the stories of the Bible at the level of children and make the Scriptures relevant without sacrificing the authenticity of the story.

What do you hope folks will gain from this project?  Hopefully, this will make the Word of God come alive, as children read the stories then learn how to recreate them using Barry Stebbing's magnificent art lessons.

How were you personally impacted by working on this project?  This was really my first experience with the business world. Tax forms, deadlines...a whole plethora of things. Also, it really forced me to understand the Bible, not just read the words. It's something I would challenge any Christian to do. Take a Bible passage and put in words that someone who's never heard of Christianity will understand. It really forces you to know what you believe.

Who are your influences, sources of inspiration or favorite authors / artists?  At the time I was writing this book, I really can't say. With me writing the Bible stories, really the only influence you can have is the Bible. Now, I would say that in the non-fiction realm, I am strongly influenced by the writings of Norman Geisler, Ravi Zacharias, and William Lane Craig. As far as fiction, hands down favorite: Ted Dekker.

Anything else you'd like readers / listeners to know:  I really want to send out a big thank you to Barry Stebbing for getting me started on this project. It really was a fun venture for me, and I am incredibly happy with the finished result. The art lessons are wonderful and the artwork astounding. I feel so honored to have my writing included in this.