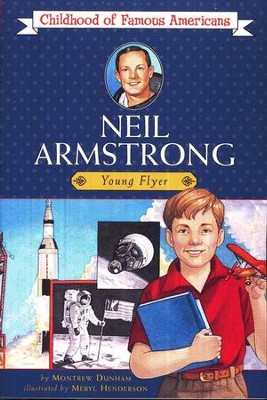 ▼▲
One of the most popular series ever published for young Americans, the "Childhood of Famous Americans" classics have been praised alike by parents, teachers, and librarians. With these lively, inspiring, fictionalized biographies - intended for children 8-12 - today's youngster is swept right into history. Neil Armstrong focuses on the first man to walk on the moon. 190 pages, softcover.

▼▲
Neil Armstrong didn’t grow up wanting to be an astronaut—because there were no astronauts in 1930. But he did love to fly from an early age, and after serving in the Korean War and then finishing college, he joined the organization that would eventually become NASA.

As the first man to walk on the moon in 1969, his comment, “That’s one small step for man, one giant leap for mankind,” was heard by millions, and Neil Armstrong’s influence on the world didn’t stop there.

From his early years in Ohio to his NASA career, to his later service as an aerospace professor and on Congressional panels, Neil Armstrong’s life is a legacy to be admired, and this narrative biography illuminates his childhood.

▼▲
Montrew Dunham is the author of a number of historical biographies for young readers in the popular Childhood of Famous Americans series. When she isn’t writing, she loves spending time with her family, children, and grandchildren in Illinois and Texas.

▼▲
I'm the author/artist and I want to review Neil Armstrong: Young Flyer Childhood of Famous Americans Series.
Back
Back