Skip to main content
BIG SUMMER BLOWOUT: Over 2,000 deals ~ up to 85% off, through 8/16. Shop now >
Arminius Speaks: Essential Writings on Predestination, Free Will, and the Nature of God - eBook
Edited By: John D. Wagner
By: James Arminius
Stock No: WW108269EB 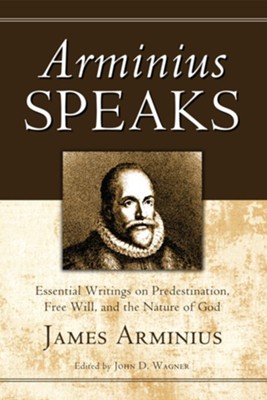 Arminius Speaks: Essential Writings on Predestination, Free Will, and the Nature of God - eBook

▼▲
James Arminius is one of the most maligned and misunderstood theologians in church history. In an era of major debate over predestination, free will, and related concepts, Arminius was accused of being Pelagian, Semi-Pelagian, or a heretic of all sorts. This is a trend that started in his time and has continued to this day. The truth is that he was a brilliant theologian who shook the foundations of Calvinism to the core. Yet he was quite orthodox in his thinking, as he had come right out of the Protestant Reformation, though he sought to reform some ideas of Calvin and Luther. Contrary to common belief, Arminius believed in the utter depravity of man and that a major work of grace, i.e., prevenient grace, is necessary to bring a person to repentance. He also emphatically rejected Pelagianism and Semi-Pelagianism. He thoroughly answers every accusation against him and masterfully refutes William Perkins, a major Calvinist writer of that time. How do we ultimately understand what he thought? By carefully reading his writings. Until now, this was not an easy task. The only way has been to wade through his three-volume "Works," totaling 2, 300 pages. Hence the need for a compendium of some of his best writings, edited for modern readers. Our hope is to help a new generation of Christians understand this much-misunderstood theologian, an understanding especially needed in an era in which Calvinism is experiencing a major resurgence.

▼▲
James Arminius (1560-1609) was Professor of Theology at University of Leiden in Holland. His theological positions on free will, predestination, and related issues created much controversy during his era. His writings were posthumously translated into English as the three-volume Works of James Arminius from 1825 to 1875.

▼▲
I'm the author/artist and I want to review Arminius Speaks: Essential Writings on Predestination, Free Will, and the Nature of God - eBook.
Back
Back