Skip to main content
SPRING CYBER EVENT STARTS NOW: And it's a really BIG deal! Up to 88% off through 5/24>
Anti-Arminians: The Anglican Reformed Tradition from Charles II to George I
By: Stephen Hampton
Stock No: WW533363 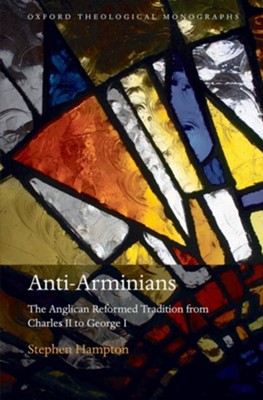 Anti-Arminians: The Anglican Reformed Tradition from Charles II to George I

▼▲
This book is a study of the Anglican Reformed tradition (often inaccurately described as Calvinist) after the Restoration. Hampton sets out to revise our picture of the theological world of the later Stuart period. Arguing that the importance of the Reformed theological tradition has
frequently been underestimated, his study points to a network of conforming reformed theologians which included many of the most prominent churchmen of the age. Focusing particularly on what these churchmen contributed in three hotly disputed areas of doctrine (justification, the Trinity and the
divine attributes), he argues that the most significant debates in speculative theology after 1662 were the result of the Anglican Reformed resistance to the growing influence of continental Arminianism.

Hampton demonstrates the strength and flexibility of the Reformed response to the developing Arminian school, and shows that the Reformed tradition remained a viable theological option for Anglicans well into the eighteenth century. This study therefore provides a significant bridge linking the
Reformed writes of the Elizabethan and early Stuart periods to the Reformed Evangelicals of the eighteenth century. It also shows that, throughout its formative period, Anglicanism was not a monolithic tradition, but rather a contested ground between the competing claims of those adhering to the
Church of England's Reformed doctrinal heritage and the insights of those who, to varying degrees, were prepared to explore new theological avenues.

▼▲
"Hampton writes with enviable clarity and precision. It is a study that anyone interested in the theological controversies of the late Stuart church will have to read." --Church History

▼▲
I'm the author/artist and I want to review Anti-Arminians: The Anglican Reformed Tradition from Charles II to George I.
Back