Skip to main content
SPRING CYBER SALE: The sale you've been waiting for! Up to 85% off through 5/25>
Arminian Theology: Myths and Realities - eBook
By: Roger E. Olson
Stock No: WW14852EB 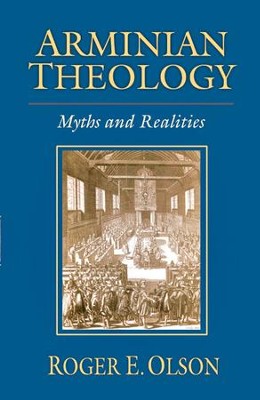 ▼▲
Roger E. Olson (PhD, Rice University) is professor of theology at George W. Truett Theological Seminary of Baylor University in Waco, Texas. He is the author of and . He is also coauthor of and (both with Stanley J. Grenz), and of (with Christopher A. Hall).

▼▲
" Arminian Theology is a much-needed book, addressing many of the myths and caricatures about Arminianism that plague and muddle many contemporary theological discussions. Whether we advocate a particular theological perspective or not, it is imperative that we as Christians describe other theological perspectives with integrity, fairly and accurately. Dr. Olson is to be complimented for this excellent contribution."
"Roger Olson recaptures Arminianism's original focus: pointing us to God's goodness rather than man's 'freed will.' This refreshing reappraisal should pave the way for better synergy between Reformed evangelicals and classical Arminians."
" Arminian Theology should prove to be a seminal text in understanding the historical contours of Arminianism. It is an excellent starting point for anyone who wants to gain a cogent and perspicacious introduction to historical, evangelical Arminian theology."
"Demonstrating that the recent offerings in the field of evangelical/Arminian scholarship constitute not a fad but a trend, Roger Olson has written a carefully researched work that aptly portrays Arminian theology at its best. Clearing away many of the stereotypes and half-truths that have remained much too long, Olson not only cogently argues that Arminian theology is nothing less than evangelical theology, but he also calls for Calvinists and Arminians to cooperate with one another in mutual recognition and respect under the broad tent of evangelicalism and for the larger good of the gospel. I heartily agree."
"Roger Olson's new book, Arminian Theology, provides the definitive defense of Arminian theology to date. This winsome and well-crafted work dispels chapter by chapter the ten major misconceptions or myths about Arminian theology perpetuated by foes and friends alike. While intended for a wide and general readership, this well-researched and documented text is really a profound essay in historical theology in which Olson gives voice to leading Arminian theologians past and present, allowing them to speak for themselves and define what Arminianism really stands for. Thus, not an exercise in defense, Arminian Theology is the most lucid and effective book-length restatement of true Arminianism in print today. Olson's gracious and irenic spirit shines through the text even while his scholarly documentation of point after point shreds the many misperceptions of Arminian theology so prevalent today. This is a must-read book for educated laypersons, pastors, and scholars interested in, and concerned about, the current and historic debates between Calvinists and Arminians. Arminian Theology certainly raises the theological bar against those who want to theologically discredit Arminianism and relegate it to the backwaters of history and the life of the church."
"Olson's purpose is to clear the good Arminian name of false accusations and charges of heresy. . . . InterVarsity Press has given a new voice to an evangelical position which has been, for the most part, suppressed and misrepresented."
". . . a fine example of contemporary polemical theology at its best."
"I heartily recommend this book to all who wish to gain a true grasp of authentic Arminianism."
"Olson's book is highly reommended for those who want to understand the Arminian-Calvinist controversy better."
"This is an extremely crucial work. It should be required reading for all students of theology. It is not a substitute for reading primary sources, but it is a helpful summary and introduction to the major issues."
"Although many of the personal and institutional animosities that used to mark relations between Calvinists and Arminians have become muted in recent years, the differences are still with us. The issues are alive because they concern matters of central importance to Christian faith. In this book Roger Olson gently and firmly corrects misunderstandings of Arminian theology that are often held by Calvinists--and Arminians! His deft expositions of the historical texts offer a significant contribution to the health of theological reflection and relationships. At the same time he demonstrates how to be irenic without adopting an empty tolerance that makes doctrine irrelevant to the church's life and mission."
"In this blockbuster of a book Roger Olson demonstrates that Arminian theology is faithfully Christian, faithfully Protestant and faithfully evangelical. He introduces his readers to a large world which many will never before have entered, the world of Arminian and Wesleyan theology, and even those familiar with this world will become more informed about it. In his contents page alone he provides more clarity on the contested issues in the Calvinism/Arminianism debate than many books on the subject. He methodically subverts many of the arguments that Calvinists routinely use against Arminian theology. This is Christian polemical theology at its best: massively informed, carefully and passionately argued, and friendly and courteous to the opposition. I recommend Arminian Theology enthusiastically, and I predict that, if it is read with the attentiveness it deserves, it will ratchet up the level of the American conversation on these issues."
"Roger Olson has done the church a great service with this clear explanation of the key tenets of the evangelical Arminianism taught by Arminius, Wesley, Wiley and others. His effort to correct common misperceptions is highly readable but well supported by thorough scholarly research. Calvinists should welcome this book for at least two reasons. First, it will help us not to misrepresent Arminianism and will thus enable both genuine dialogue and valid critique. Second, we can earnestly hope that Olson will succeed in converting to classic evangelical Arminianism the large number of evangelicals whom he recognizes to be semi-Pelagian rather than Arminian."

▼▲
I'm the author/artist and I want to review Arminian Theology: Myths and Realities - eBook.
Back
Back