We are OPEN and SHIPPING - click here for shipping estimates
Armenian Golgotha: A Memoir of the Armenian Genocide, 1915-1918
Edited By: Peter Balakian, Aris Sevag
By: Grigoris Balakian 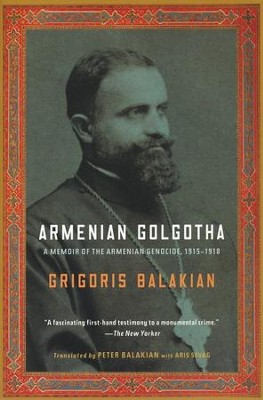 ▼▲
A horrifying, first-hand account of the Armenian Genocide, Grigoris Balakian's witness is preserved here as reminder of the first modern genocide. Arrested with 250 other leaders at the beginning of the Ottoman Empire's systematic attempt to eliminate the Armenian people of Turkey, over the next four years, Balakian would see a seemingly endless caravan of blood before his miraculous escape. 509 pages, indexed, softcover.

▼▲
On April 24, 1915, Grigoris Balakian was arrested along with some 250 other leaders of Constantinople’s Armenian community. It was the beginning of the Ottoman Empire’s systematic attempt to eliminate the Armenian people from Turkey—a campaign that continued through World War I and the fall of the empire. Over the next four years, Balakian would bear witness to a seemingly endless caravan of blood, surviving to recount his miraculous escape and expose the atrocities that led to over a million deaths.

Armenian Golgotha is Balakian’s devastating eyewitness account—a haunting reminder of the first modern genocide and a controversial historical document that is destined to become a classic of survivor literature.

▼▲
Born in 1876, Grigoris Balakian was one of the leading Armenian intellectuals of his generation. In Ottoman Turkey he attended Armenian schools and seminary; and in Germany he studied, at different times, engineering and theology. He was one of the 250 cultural leaders (intellectuals, clergy, teachers, and political and community leaders) arrested by the Turkish government on the night of April 24, 1915, and deported to the interior. Unlike the vast majority of his conationals, he survived nearly four years in the killing fields. Ordained as a celibate priest (vartabed) in 1901, he later became a bishop and prelate of the Armenian Apostolic Church in southern France. He is the author of various books and monographs (some of them lost) on Armenian culture and history, including The Ruins of Ani (1910) and Armenian Golgotha, volume 1 (1922) and volume 2 (1959). He died in Marseilles in 1934.

▼▲
"A fascinating first-hand testimony to a monumental crime."
—The New Yorker

"Gripping. . . . A powerful and important book. . . . It takes its place as one of the key first-hand sources for understanding the Armenian Genocide."
—Mark Mazower, The New Republic

"Powerful. . . . Riveting. . . . A poignant, often harrowing story about the resiliency of the human spirit [and] a window on a moment in history that most Americans only dimly understand."
—Chris Bohjalian, Washington Post

"An immensely moving, harrowing memoir that instantly takes its place as a classic alongside Primo Levi’s Survival in Auschwitz and Elie Wiesel’s Night."
—Carlin Romano, The Chronicle of Higher Education

"Read this heartbreaking book. Armenian Golgotha describes the suffering, agony and massacre of innumerable Armenian families almost a century ago; its memory must remain a lesson for more than one generation."
—Elie Wiesel, author of Night

"An appalling and magnificent book. . . . It owes its existence to [Balakian’s] determination to survive to write it . . . a sacred task that gives him the strength to persevere through the impossible circumstances that killed well over a million of his countrymen."
—Benjamin Moser, Harper’s

"Shocking and brilliant. . . . Exquisitely rendered. . . . This book has the feel of a classic about it, and I suspect that future writers on historical trauma and its representation will turn eagerly to Armenian Golgotha. It’s a massively important contribution to this field."
—Jay Parini, The Chronicle of Higher Education

"Monumental. . . . Balakian provides strong evidence that these gruesome proceedings were carried out under official orders from the highest level. . . . For generations to come Armenian Golgotha will remain a first-hand documentation of a historic tragedy written from the perspective of a talented scholar."
—Henry Morgenthau, III, Boston Sunday Globe

"[A work] of exceptional interest and scholarship."
—Christopher Hitchens, Slate

"The translation and publication of Armenian Golgotha in English is long overdue. It constitutes a thundering historical proof that those who deny the Armenian Genocide are engages in a massive deception."
—Deborah E. Lipstadt, author of Denying the Holocaust: The Growing Assault on Truth and Memory

"Groundbreaking. . . . Comprehensive. . . . Sobering. . . . Armenian Golgotha is replete with narratives that focus on collective suffering, marking this memoir as one of the few to explicate the true nature of the crime. . . . Balakian’s memory is extraordinary, but so, too, are his intellect, his compassion and his ethical obligation to immortalize his beloved co-nationals."
—Donna-Lee Frieze, The Jewish Daily Forward

"An Armenian equivalent to the testimonies of Holocaust survivors like Primo Levi and Elie Wiesel."
—Adam Kirsch, Nextbook

"The descriptions of the Armenian genocide are striking and the author spares his readers none of the gruesome details. . . . A riveting and powerful indictment of a genocide that became a paradigm for future genocides."
—Holger H. Herwig, The Gazette (Montreal)

"An essential memoir, a lively and extraordinary life story. . . . This is more than an eyewitness account, it is a masterful history in its own right."
—Seth J. Frantzman, The Jerusalem Post

"Weighted with eyewitness accounts and distinguished by Balakian’s prodigiously sharp memory, this book is not a scholar’s history, of course, but an educated prelate’s, with an enviable grasp of Ottoman and European history. . . . Memory and hope for the future live in seminal texts such as Armenian Golgotha."
—Keith Garebian, The Globe and Mail (Toronto)

"A powerful, moving account of the Armenian Genocide, a story that needs to be known, and is told here with a sweep of experience and wealth of detail that is as disturbing as it is irrefutable."
—Sir Martin Gilbert

"Extraordinary. . . . This book will become a classic, both for its depiction of a much denied genocide and its humane and brilliant witness to what human beings can endure and overcome."
—Robert Jay Lifton, author of The Nazi Doctors: Medical Killing and the Psychology of Genocide

"Witness literature of the highest order, to be put aside the great testimony from the Shoah. . . . Required reading for those who wish to comprehend the 20th century."
—Robert Leiter, The Jewish Exponent

"An astonishing memoir. . . . An important primary document concerning the Armenian Genocide. . . . A major addition to the literature of witness and testimony."
—Robert Melson, Genocide Studies and Prevention: An International Journal