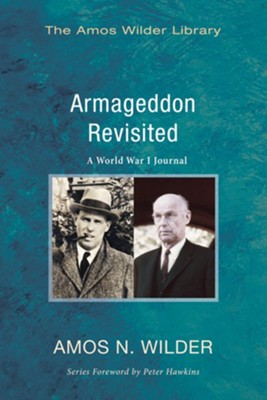 ▼▲
Description: Amos Wilder, a distinguished New Testament scholar and poet, was only a youth when he volunteered to serve as an ambulance driver with the American Field Service during World War I and then became a corporal in the Army's 17th Field Artillery of the 2nd Division. His journals and letters home (including correspondence with his younger brother, Thornton Wilder) form the basis of this book of reminiscences about his experiences, one of the few wartime memoirs that eloquently articulates and interprets the common soldier's point of view. As an ambulance driver, Wilder traveled from the western front to the mountains of Macedonia, where his memoir sheds light on the many nations, races, and religions involved in the conflict in that turbulent region. After the United States entered the war, Wilder, now the soldier, participated in the decisive 1918 actions at Belleau Wood, Soissons, and the closing Argonne drive. His journals provide a brilliant panorama of the activities and people behind the lines, an often arresting portrayal very different from the scenes of death in the trenches that others have described. Throughout, Wilder explores in a fresh and provocative way larger questions about the enduring meaning of a shattering event in world history remembered by himself and others as an encounter with ""Armageddon.""

▼▲
I'm the author/artist and I want to review Armageddon Revisited: A World War I Journal.
Back