Skip to main content
Aristotle: The Nicomachean Ethics
By: Aristotle
Stock No: WW49497 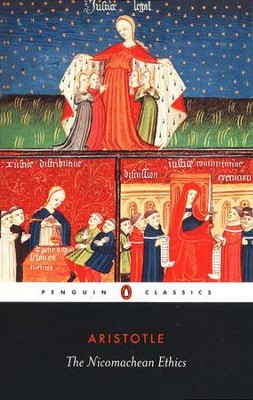 ▼▲
In The Nicomachean Ethics Aristotle sets out to examine the nature of happiness. He argues that happiness consists in the soul acting in accordance with virtue, which encompasses moral (courage, generosity, justice) and intellectual (knowledge, wisdom, insight) virtues. The Ethics also discusses the nature of practical reasoning, the value and the objects of pleasure, the different forms of friendship and the relationship between individual virtue, society and the State. Aristotle's thought has profoundly influenced Western philosophy and ethics, as careful study of this volume is sure to demonstrate.

J.A.K. Thomson's translation has been revised by Hugh Tredennick and is accompanied by a new introduction by Jonathan Barnes. This edition also includes an updated bibliography and a new chronology of Aristotle's life and works.

▼▲
Previously published as Ethics, Aristotle's The Nicomachean Ethics addresses the question of how to live well, and originates the concept of cultivating a virtuous character as the basis of his ethical system. This Penguin Classics edition is translated from the Greek by J.A.K. Thomson with revisions and notes by Hugh Tredennick, and an introduction and bibliography by Jonathan Barnes. 'One swallow does not make a summer; neither does one day. Similarly neither can one day, or a brief space of time, make a man blessed and happy' In The Nicomachean Ethics, Aristotle sets out to examine the nature of happiness. He argues that happiness consists in 'activity of the soul in accordance with virtue', for example with moral virtues, such as courage, generosity and justice, and intellectual virtues, such as knowledge, wisdom and insight. The Ethics also discusses the nature of practical reasoning, the value and the objects of pleasure, the different forms of friendship, and the relationship between individual virtue, society and the State. Aristotle's work has had a profound and lasting influence on all subsequent Western thought about ethical matters. Aristotle (384-22 BC) studied at the Academy of Plato for 20 years and then established his own school and research institute, 'The Lyceum'. His writings, which were of extraordinary range, profoundly affected the whole course of ancient and medieval philosophy and are still eagerly studied and debated by philosophers today. If you enjoyed The Nicomachean Ethics, you might like Plato's The Symposium, also available in Penguin Classics.

▼▲
Aristotle was born in 384 BC, and studied in Athens under Plato. His writings were of extraordinary range, and many of them have survived. He died in 323 BC.

▼▲
I'm the author/artist and I want to review Aristotle: The Nicomachean Ethics.
Back
Back