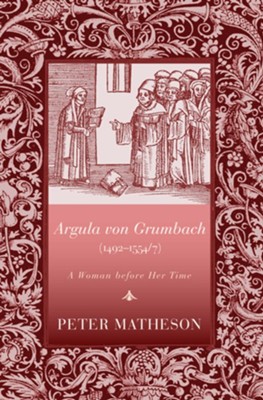 ▼▲
At a time when women were expected to stick to their household duties, according to Peter Matheson, Argula von Grumbach burst through every barrier. Matheson offers here a biography of the Reformation's first woman writer. Argula von Grumbach's first pamphlet in 1523 was reprinted all over Germany. Thousands of copies of her eight pamphlets appeared. Through her writing, von Grumbach defied her Bavarian princes (and her husband), denounced censorship, argued for an educated church and society, and developed her own understanding of faith and Scripture. She even intervened in the Imperial Diets at Nuremberg and Augsburg. Drawing for the first time on her correspondence, the author shows how von Grumbach paid dearly for her outspokenness but remained undaunted. Though some saw her as a she-devil and others as a harbinger of a new age, Matheson shows von Grumbach as a woman engaged in the life of the villages where she lived, as one motivated by the dreams she had for her children. In a time of sweeping change and risking everything for the light and truth she was given, Argula von Grumbach showed what the vision and determination of one person could achieve.

▼▲
Peter Matheson is a Fellow in the Department of Theology and Religion at Otago University in New Zealand. He has authored several books in Renaissance and Reformation studies, with a particular focus on radical movements and women's history, including The Imaginative World of the Reformation.