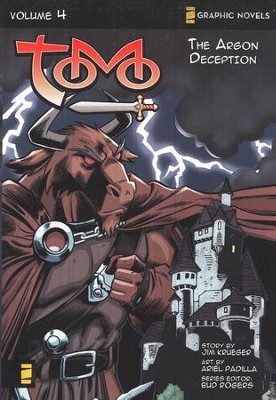 ▼▲
More of Tomo's history is revealed as he, Hana and her grandfather make their way to Japan to attempt entering the portal between this world and that one. Events in Argon Falls, leading up to the change from human to animal, are told to Hana as Tomo slowly loses grip on his humanity. But before that happens, Hana discovers much more about Tomo, his brother King Argath, the serpentine Urn'ado, and Hana's own father Clayton, the courageous but imprisoned ex-advisor to Argath's now-dead father. But more is to be discovered as Hana and her grandfather visit Argon Falls for the first time!Recommended for ages 8 to 12.

The action moves from San Francisco to Argon Falls, where Hana learns that the enemy wants to steal the Spirit Sword from her to completely enslave the citizens. In preparing for battle, she will learn that, even after one’s training is complete, there are still lessons to be learned.

▼▲
Bud Rogers is a cartoonist and editor and has been very active in the Christian comics community for the past fifteen years. Bud uses his organizational and management skills to assist artists and writers in realizing their creative visions.
Rob Corley is a veteran animator with Disney, San Marco Films, and Curious Pictures. Rob is also the cofounder Funnypages Productions, an animation development and illustration company, and Funnypages Press, a comic book publisher.
Tom Bancroft is a veteran Disney and Big Idea animator. While with Big Idea, he designed and directed the LarryBoy series of videos. Tom still keeps his hands in animation, but he also enjoys creating comics.
Ariel has been drawing comics for the past fifteen years in the Philippines. His most recent work has been on the relaunch of the eighties comic series The Maze Agency for IDW Publishing.

Funnypages Productions is a studio founded by veteran Disney and Big Idea animators Tom Bancroft and Rob Corley. Their goal is to capture the fun and excitement of animation in books for readers of all ages.

▼▲
I'm the author/artist and I want to review The Argon Deception, Volume 4, Z Graphic Novels / Tomo.
Back
Back