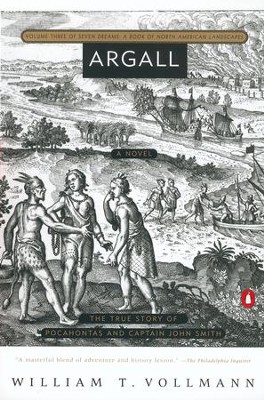 ▼▲
From the National Book Award-winning author of Europe Central – a hugely original fictional history of Pocahontas, John Smith, and the Jamestown colony in Virginia

In Argall, the third novel in his Seven Dreams series, William T. Vollmann alternates between extravagant Elizabethan language and gritty realism in an attempt to dig beneath the legend surrounding Pocahontas, John Smith, and the founding of the Jamestown colony in Virginia-as well as the betrayals, disappointments, and atrocities behind it. With the same panoramic vision, mythic sensibility, and stylistic daring that he brought to the previous novels in the Seven Dreams series--hailed upon its inception as "the most important literary project of the '90s" (The Washington Post)--Vollmann continues his hugely original fictional history of the clash of Native Americans and Europeans in the New World. In reconstructing America's past as tragedy, nightmare, and bloody spectacle, Vollmann does nothing less than reinvent the American novel.

▼▲
William T. Vollmann is the author of ten novels, including Europe Central, which won the National Book Award.  He has also written four collections of stories, including The Atlas, which won the PEN Center USA West Award for Fiction, a memoir, and six works of nonfiction, including Rising Up and Rising Down and Imperial, both of which were finalists for the National Book Critics Circle Award. He is the recipient of a Whiting Writers Award and the Strauss Living Award from the American Academy of Arts and Letters.  His journalism and fiction have been published in The New Yorker, Harpers, Esquire, Granta, and many other publications.

▼▲
"No book since John Barth's The Sot-Weed Factor has so thoroughly transported readers back in time to our nation's origins. Prepare yourself to confront the political and moral compromises that got us where we are today. You won't find a better guide."
--The Philadelphia Inquirer

"Argall may bring us closer to the truth of America's first interracial romance than a thousand biographies written on the subject." —San Francisco Chronicle

"Readers are likely to come away from this story...appreciating the mordant resonance with writers from Defoe to Conrad." —The Washington Post

▼▲
I'm the author/artist and I want to review Argall - eBook.
Back
Back