Skip to main content
Are Demons the Cause of Your Sickness? (Revised Edition)
By: Dr. Ebenezer N. Caternor
Stock No: WW798810 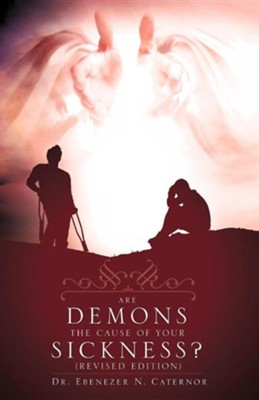 Are Demons the Cause of Your Sickness? (Revised Edition)

▼▲
"And you shall know the truth, and the truth shall make you free"-John 8:32 Are you still suffering from your sickness after consulting with all the specialists in the medical profession? You have also tried all the medications that pharmacology can offer but your pain and suffering still persist. There may be a spiritual demonic cause to your sickness. You are about to discover the truth about some human sicknesses which medical science and pharmacology have neither clues nor cures. Get the truth about your peculiar problem and seek help from any anointed servant of God in the Healing and Deliverance Ministry of Jesus Christ. Ebenezer Caternor graduated from the Ghana Military Academy in 1966 in the rank of Second Lieutenant. He served in the Armored Reconnaissance Regiment as a junior officer. He held various appointments in the Army and notable among them were: Command of an Armored Squadron, a Directing Staff at the Ghana Armed Forces Command and Staff College. He served as the Director of Administration and later the Chief Staff Officer at the Army Headquarters. In 1995 he was posted to the U.S.A. as Ghana's Military Attache and concurrently as Defense Advisor to Canada. He retired in the rank of Colonel. He enrolled in Global University in Missouri where he graduated in 2001, B.A. (Bible & Theology). He moved on to Trinity Theological Seminary-Newburgh, Indiana where he graduated in 2004, M.A. (Pastoral Ministry). He continued at the same Seminary for his Ph.D. in Religious Studies (2009). Dr. Ebenezer Caternor is an ordained minister with the Assemblies of God and the Founder and Senior Pastor of Miracle Temple Assembly of God in Silver Spring, Maryland, U.S.A. He has been in the Divine Healing and Deliverance Ministry for the past twelve years.

▼▲
I'm the author/artist and I want to review Are Demons the Cause of Your Sickness? (Revised Edition).
Back