Skip to main content
Who Are We?: Critical Reflections and Hopeful Possibilities
By: Jean Bethke Elshtain
Stock No: WW847256 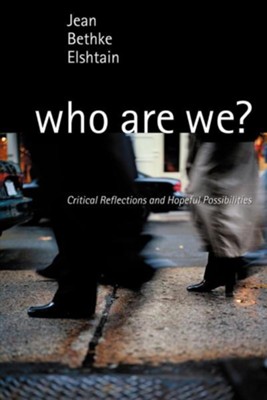 Who Are We?: Critical Reflections and Hopeful Possibilities

▼▲
Jean Bethke Elsthain (1941-2013) was the Laura Spelman Rockefeller Professor of Social and Political Ethics at the University of Chicago. She was also a contributing editor for The New Republic and a prolific writer.

▼▲
First Things
"Elshtain reflects on literature, movies, and the stuff of everyday life, and does so unblinkingly. She understands the abyss and teaches us how to shudder, but she understands, too, the gift of grace that relentlessly proposes a better way—a better way to think and a better way to live. This a faith-filled cultural criticism of a high order. Beautifully written and warmly recommended."

John Witte Jr.
"In this haunting volume one of the world's leading ethicists offers compelling contemporary evidence that we are at once sinners and saints, reprobate and righteous, lost and saved —simul justus et peccator, in Martin Luther's famous phrase. Jean Bethke Elshtain testifies both to the ample pathos of modern American life and thought and to the enduring promise of the cardinal Christian virtues of faith, hope, and charity. No one who reads this book can come away unmoved or uninspired."

Mary Ann Glendon
"Who Are We? is vintage Elshtain—social criticism at its best, politically astute and theologically informed. These essays, with pointed stories and examples, remind us that we constitute ourselves, individually and collectively, by our actions and decisions. Elshtain raises the question 'Where are we going?' and invites us to reflect on whether we are really headed in the direction of what is best and truest."

Publishers Weekly
"University of Chicago ethicist Jean Bethke Elshtain discusses nothing less than the state of humankind at the turn of the millennium in the fascinating Who Are We? Critical Reflections and Hopeful Possibilities. Elshtain analyzes youth culture with particular care, drawing on theologians as diverse as Dietrich Bonhoeffer and Pope John Paul II. She pulls no punches in deploring our society's market-driven separation of parents from children, who need 'real time,' not just 'quality time."

Choice
"Elshtain brings together theological, cultural, and political insights to produce a penetrating critique of the sources and predicaments of humankind's current social malaise, and where we must look for hope. . . This is cultural criticism that is sane and very accessible. Recommended for all readership levels."

Christian Retailing
"A respected Christian ethicist calls on Christians who are troubled by the events of modern culture to look to who they are as Christians and give hope to the world. . . Thoughtful and timely."

Calvin Theological Journal
"A bold and winsome call for recovery, recovery of hope through reclaiming the dignity of human personhood in the context of community tradition that honors both our limitations and our possibilities as dependent creatures under God. . . Chapters two and three (on pride and sloth, respectively) are among the wisest contemporary discussions on the topics I have read."

Library Journal
"Elshtain strikes a balance between overly optimistic liberalism and reactionary conservatism. . . She proposes instead that traditional Christianity is an antidote to the ills of contemporary American life. . . Unlike many contemporary Christian conservatives, she sees much value in American culture, emphasizing the example of the young, heroic victims at Columbine rather than the two teen-aged killers. Elshtain advocates self-interest tempered by social concern in a book that will appeal to anyone interested in the current state of American culture."

Michael Perry
"Jean Bethke Elshtain is one of our most insightful interpreters and critics of contemporary culture. Her religiously grounded voice is distinctive and penetrating. Who Are We? is a compelling set of reflections, both disturbing and prophetic."

Ethics
"Jean Bethke Elshtain's compelling new book begins from the premise that we human beings are embodied creatures whose dignity 'lies in the fact that we are beings to whom a certain loving attention is owed.' . . . Accepting the claim that with words go worlds, Elshtain makes a vital contribution to the project of creating a world fit for human habitation through reinscribing our ethical discourse with forgotten concepts, 'for without hope and trust our hearts are locked away."

Theological Studies
"A short and provocative book about American society. . . Elshtain continues to offer insights about contemporary society in an accessible style informed by a broad reading of the heritage of the West that can only enrich public discourse about our common life."

The New York Times Book Review
"Sounding at the end the note of hope, Elshtain finds it running like a submerged stream in some modern films, including, 'Titanic,' and some modern literature, like the poetry and prose of Czeslaw Milosz, a survivor of Nazi occupation and Communist domination. . . The title of the book asks a question, to which the book implicitly responds. We are those who make this culture of atheism and faith, cash bottom lines and virtues beyond price, cynicism and aspiration."

Richard J. Bernstein
"Jean Bethke Elshtain has a rare ability to integrate serious theological speculation with acute political and social commentary. Beginning with a meditative reflection on the writings of Dietrich Bonhoeffer and John Paul II, she perceptively analyzes both 'Who Are We?' and 'How Far Have We Fallen?' Focusing on the sins of pride and sloth, she seeks to show their relevance to some of the most pressing issues of the day: rampant economic greed, eugenics and cloning, the pervasiveness and perniciousness of a rational choice mentality, the failure to realize the work required for genuinely loving children, the teenage explosion of gratuitous murder, and the acceptance and increasing use of the death penalty. With wit and humane sensitivity, Elshtain demonstrates her living Christian faith by showing how it is relevant to the moral dilemmas that we all confront every day. She has a knack for getting to the heart of issues by presenting these in a most vivid manner. Her prose is always lively and makes powerful use of concrete examples, including recent films. I suspect that some readers will be delighted with her forcefully expressed judgments and others will be outraged. But all will agree that — in the best sense — Elshtain is always thought-provoking."

▼▲
I'm the author/artist and I want to review Who Are We?: Critical Reflections and Hopeful Possibilities.
Back