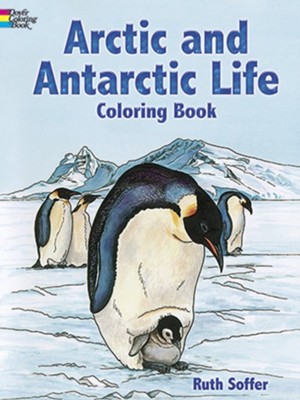 ▼▲
What do you think of when you hear the words "Arctic" and "Antarctic"? Cold, frozen wastelands? Mountains of ice and snow, completely empty of life? If so, then this fascinating coloring book should change your mind.
Inside these pages, you'll fine 44 realistic, accurately rendered illustrations of plants and animals found in the polar regions, including such Arctic residents as terns and humpback whales, baby harp seals, a sea snail, Atlantic puffins, an Arctic hare, and a gray wolf. Among the Antarctic residents you'll meet are minke and si whales, a sea spider, a leopard seal sunning itself on an ice floe, Weddell seals and a pup, the black-browed albatross, and king and emperor penguins. Carefully depicted in their natural habitats, the animals are described in accompanying fact-filled captions.
Sure to delight coloring enthusiasts of all ages, this entertaining and educational coloring book will appeal as well to nature lovers and young environmentalists.

▼▲
I'm the author/artist and I want to review Arctic and Antarctic Life Coloring Book.
Back