BIG SUMMER BLOWOUT: 3 Days Only! Save up to 90% thru Wednesday. Shop now >
Architect of Evangelicalism: Essential Essays of Carl F. H. Henry
By: Carl F.H. Henry 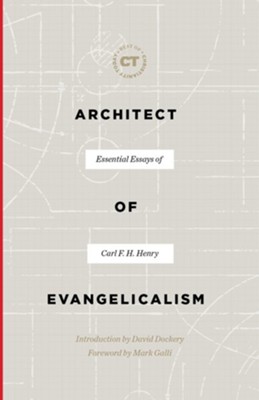 In recent years, the label “evangelical” has been distorted and its usefulness questioned. No one is better equipped to provide a clear understanding of evangelicalism than the late Carl F. H. Henry, the founding editor of Christianity Today and the most influential theologian of American evangelicalism in the twentieth century. While Billy Graham was preaching the gospel to stadiums full of people, Henry was working tirelessly to help Christians adopt a worldview that encompasses all of life.

Architect of Evangelicalism helps us gain a better sense of the roots of American evangelicalism by giving us the best of Henry’s Christianity Today essays on subjects such as what defines evangelicalism, what separates it from theological liberalism, what evangelical Christian education should look like, and how evangelicals should engage with society.

▼▲
Carl F. H. Henry (1913-2003) was an evangelical Christian theologian. Henry earned degrees from Wheaton College, Northern Baptist Theological Seminary, and Boston University. In 1942, he helped launch the National Association of Evangelicals and served on its board for many years. In 1956, he assisted Rev. Billy Graham in founding Christianity Today and served as the editor until 1968. Henry's six-volume God, Revelation, and Authority has been widely influential in shaping evangelicals' beliefs around the world.

Carl F. H. Henry was the postwar American evangelical movement’s Saint Augustine. He mapped out a coherent and compelling theological vision while also speaking prophetically to the issues of his day. Reading these Christianity Today editorials will strike the reader, sometimes jarringly so, as relentlessly relevant to our own moment. Carl Henry, though dead, still speaks to an evangelical conscience that is still uneasy after all these years. —Russell Moore, president, The Ethics & Religious Liberty Commission of the Southern Baptist Convention

From the 1940s into the first decade of the twenty-first century, Carl F. H. Henry was both advocate and critic of the global evangelical movement. Even today, his words reflect the wisdom, insight, and compassion that made him such a towering influence in his own day and an abiding presence in our own. We still need to hear what Carl Henry has to say. —Timothy George, research professor, Beeson Divinity School, Samford University; general editor, Reformation Commentary on Scripture

Modern evangelicalism has never produced a more bracing and prescient thinker than Carl F. H. Henry. I am delighted that this volume of his essays will introduce Henry to a new generation of readers. —Thomas S. Kidd, Vardaman Distinguished Professor of History, Baylor University

▼▲
I'm the author/artist and I want to review Architect of Evangelicalism: Essential Essays of Carl F. H. Henry.
Back
×