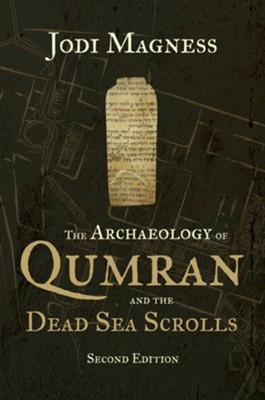 The Archaeology of Qumran and the Dead Sea Scrolls, 2nd Edition

▼▲
Her award-winning book introduced general readers to the study of the Dead Sea Scrolls and the Qumran site. In this second edition, Magness revises and updates that renowned work in light of the publication of all of the scrolls and additional data from the excavations of Roland de Vaux, Yitzhak Magen, and Yuval Peleg. 400 pages, softcover from Eerdmans.

The Dead Sea Scrolls have been described as the most important archaeological discovery of the twentieth century. Deposited in caves surrounding Qumran by members of a Jewish sect who lived at the site in the first century BCE and first century CE, they provide invaluable information about Judaism in the last centuries BCE.

Like the Dead Sea Scrolls, the Qumran site continues to be the object of intense scholarly debate. In a book meant to introduce general readers to this fascinating area of study, veteran archaeologist Jodi Magness provides an overview of the archaeology of Qumran that incorporates information from the Dead Sea Scrolls and other contemporary sources.

Magness identifies Qumran as a sectarian settlement, rejecting other interpretations including claims that Qumran was a villa rustica or manor house. By carefully analyzing the published information on Qumran, she refines the site’s chronology, reinterprets the purpose of some of its rooms, and reexamines archaeological evidence for the presence of women and children in the settlement. Numerous photos and diagrams give readers a firsthand look at the site.

▼▲
Jodi Magness is the Kenan Distinguished Professor for Teaching Excellence in Early Judaism at the University of North Carolina at Chapel Hill and a member of the American Academy of Arts and Sciences. From 2017 to 2020, she served as president of the Archaeological Institute of America. In addition to Qumran and the Dead Sea Scrolls, her research interests include ancient pottery, ancient synagogues, and the Roman army in the East. She has participated in over twenty different excavations in Israel and Greece, including as codirector of the 1995 excavations in the Roman siegeworks at Masada. Since 2011 she has directed excavations at Huqoq in Israel's Galilee.

▼▲
"In this fluent, clearly written book, whose vivid account of the Qumran excavations is no less engaging than a literary thriller, Jodi Magness also succeeds in providing an accurate, updated picture of the archaeological finds and their significance against the backdrop of the Dead Sea Scrolls. A straightforward report of conflicting scholarly interpretations and academic scandals, accompanied by rich bibliographical notes, combine to create a robust picture of the status quaestionis of the most dramatic twentieth-century archaeological discovery."
— Vered Noam
Tel Aviv University

"Now revised and updated, this second edition is even better than the first. Taking twenty years of new data, publications, and interpretations into account, Magness has ensured that her accessible presentation of the archaeology of Qumran and the Dead Sea Scrolls will remain at the forefront of required readings for colleagues, students, and the general public alike for decades to come."
— Eric H. Cline
The George Washington University

"The latest and best discussion of Qumran. . . . This book is essential reading for specialists and general readers alike."
— Archaeology

"An admirably clear and concise progress report on what is known about this spectacular discovery."
— Harper’s Magazine

"There’s plenty of life left in the Dead Sea Scrolls, as amply demonstrated in this superb volume. . . . A work of wide appeal."
— Choice

"This book represents the most up-to-date study of the archaeological evidence from Qumran, the site where the Dead Sea Scrolls were discovered. Jodi Magness has reexamined the archaeological record in great detail and has made judicious use of textual and historical sources to provide a sustained analysis of the highest quality. Finally we have a new study by a highly qualified archaeologist that will put to rest much of the amateurish discussion that surrounds Qumran while also making available to experts the material they need to debate the scholarly issues."
— Lawrence H. Schiffman
New York University

"This volume offers an excellent analysis of the most burning questions related to the archaeology of Qumran and the neighboring sites, and it suggests well-considered and original answers. Written in an extremely attractive way, with both specialists and nonspecialists in mind, it whets the appetite for further study. The illustrations and indexes add much to the clarity of the discussion."
— Emanuel Tov
Hebrew University of Jerusalem

"Jodi Magness here provides the most up-to-date and balanced archaeological profile of the site connected with the Dead Sea Scrolls. With numerous theories floating around, it is refreshing to have available at last a well-researched analysis that is as well written as it is authoritative. The nonspecialist will find this book easily readable, with all terms clearly explained, while the specialist will find a solid, comprehensive analysis such as we have long desired."
— Eugene Ulrich
University of Notre Dame

"In The Archaeology of Qumran and the Dead Sea Scrolls Jodi Magness, the authority on Qumran archaeology, has supplied her most extended statement on the subject. Her analyses of the material evidence and the relevant literary sources are both definitive and a pleasure to read."
— James C. VanderKam
author of The Dead Sea Scrolls Today

"In the half century since Roland de Vaux excavated Qumran, the most important contributions to its archaeology have undoubtedly been made by Jodi Magness. Her erudite, painstaking, and levelheaded research has solved many of its problems. This book of hers is at once a first-rate scholarly work and a delightful read."
— Magen Broshi
author of Bread, Wine, Walls and Scrolls

"Magness successfully sketches a coherent picture which accounts for the identity of the inhabitants of Qumran, the history of the site, the religious practices of the sect, and the problematic question of ’celibacy’ at Qumran. This book comes highly recommended to anyone interested in the status quaestionis of the archaeology of Qumran."
— Journal of Hebrew Scriptures

"This book, by one of the central movers in the field, is an extraordinarily useful and much needed critical summary of the current state of the question of Qumran archaeology. It supersedes all previous treatments and belongs on the bookshelf of anyone working on the Dead Sea Scrolls, ancient Judaism, or the archaeology of Second Temple Judaism."
— Catholic Biblical Quarterly

▼▲
I'm the author/artist and I want to review The Archaeology of Qumran and the Dead Sea Scrolls, 2nd Edition.
Back