We are OPEN and SHIPPING - click here for shipping estimates
PRE-SUMMER CYBER SALE EXTENDED thru 6/1 ~ Over 2,500 items up to 90% off
Archaeology, Bible, Politics, and the Media: Proceedings of the Duke University Conference, April 23-24, 2009
By: Eric M. Meyers, Carol L. Meyers 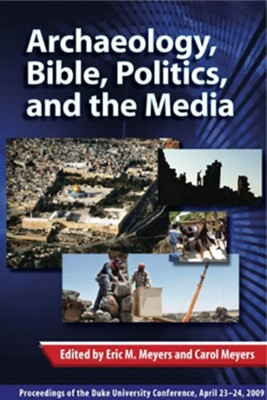 Archaeology, Bible, Politics, and the Media: Proceedings of the Duke University Conference, April 23-24, 2009

By: Eric M. Meyers, Carol L. Meyers
More in Duke Judaic Studies Series
Penn State Press / 2012 / Hardcover
Write a Review
Expected to ship on or about 06/27/20.
Email me when this product is available.
Stock No: WW062372

Archaeological discoveries relating to the Bible are prominent in the public square. Even archaeological controversies normally confined to the pages of obscure journals are considered newsworthy when they touch on biblical themes, people, or places. However, scholars are not always equipped to handle this sort of attention. Thus, the conference published in this book was organized to bring scholars into conversation with representatives of the media and to help them become better prepared to address the general public. Participants included the print media and the visual media as well as academics. The relation between archaeological controversies and Middle East politics emerged as a fraught subject in several essays, with the situation of the City of David in Jerusalem as a case in point. Other essays consider looting in Iraq and in other regions in the Middle East and highlight the legal and moral issues involved—for when legal norms recognized in international law and archaeological standards are violated, chaos reigns.

This volume opens a dialogue between scholars and the media, providing both with perspectives that will enable them to become better at communicating what they do to a wide audience. And it offers lay communities who learn about archaeology and the Bible through the popular media information that will make them more sensitive to the way discoveries and issues are presented.

▼▲
I'm the author/artist and I want to review Archaeology, Bible, Politics, and the Media: Proceedings of the Duke University Conference, April 23-24, 2009.
Back
×