SHIPPING DELAYS & COVID-19 IMPACT - learn more
CYBER WEEK SALE: Up to 85% off, thru 12/7. >
Arcade and the Golden Travel Guide
By: Rashad Jennings 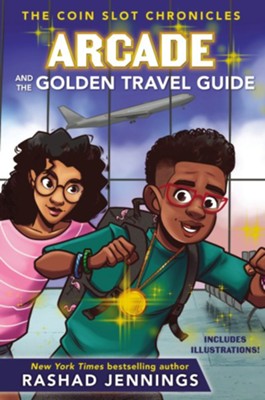 Arcade and the Golden Travel Guide

▼▲
In Arcade and the Golden Travel Guide, Arcade, Zoe, and their new best friend, Doug, travel from New York to Virginia to stay with cousins and best friends, Derek and Celeste. It's a chance for Arcade to feel "normal" again after all the thrilling adventures from Book 1 in the series. But nothing is normal as long as the Triple T Token is hanging around his neck. Plus, Derek claims he's stumbled upon some troubling information, and now a suspicious person is following him. Arcade wonders if the trouble is related to the token---after all, someone has already tried to take it from him once. Where did this Triple T come from? And are all the adventures it provides worth all the trouble it brings? Recommended for ages 8 to 12 years.

Where did the Triple T Token come from? And can Arcade keep the token for himself &hellip; or will sinister forces steal it from his grasp? Finally, the answers you—and Arcade—have been waiting for! Arcade and the Golden Travel Guide is the second book in the humorous and imaginative Coin Slot Chronicles series by New York Times bestselling author, former NFL running back, and Dancing with the Stars champion Rashad Jennings.

Arcade, Zoe, and their friend, Doug, travel from New York to Virginia to stay with cousins and best friends Derek and Celeste. It’s a chance for Arcade to feel "normal" again after all the thrilling Triple T adventures. But nothing is normal as long as the Triple T Token is hanging around Arcade’s neck. Plus, Derek claims he’s stumbled upon some troubling information, and now a suspicious person is following him.

While spying on the guy Derek thinks is following him, he and Arcade discover a hidden box of old notes deep in the woods. As Arcade, Zoe, and their friends start to put the pieces together, the value of the token becomes clear, and the stakes are higher than ever.

Arcade will have to decide once and for all: Are the adventures the Triple T Token provides worth the trouble it brings?

Written and designed for reluctant readers, with shorter chapters and meaningful illustrations throughout the book. Arcade and the Golden Travel Guideteaches children ages 8 and up:

▼▲
I'm the author/artist and I want to review Arcade and the Golden Travel Guide.
Back
×