Arcade and the Dazzling Truth Detector
By: Rashad Jennings 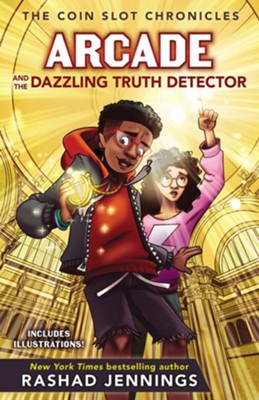 Arcade and the Dazzling Truth Detector

Join Arcade Livingston and his friends on their most important time-travelling, globe-trotting adventures yet in this fourth and final book in the Coin Slot Chronicles series, where all the questions about the mysterious and powerful Triple T Token will finally be answered.

What does the last T on the Triple T Token stand for? Where did it come from? What did Arcade’s mom do with the token when she had it? And why does Arcade have it now?

Arcade and Zoe Livingston have been on a quest for truth ever since the mysterious lady gave Arcade the token, said, "Happy Travels," then vanished. Now, Arcade Livingston has just one wish on his twelfth birthday: to experience the ests of life.

From the highest, lowest, deepest, coldest, and hottest places on Earth; to some of the greatest, most influential moments in history—Arcade will get his wish and much more than he could ever dream as the Triple T Token takes him and Zoe back in time and to the top (and bottom!) of the world. It’s a whirlwind journey of self-discovery in some of the most exciting and unusual places on the planet.

So, hang on tight, because these final Arcade adventures are filled with magic elevator rides you’ll never, ever forget.

Read as part of the series or as a stand-alone novel! Arcade and the Dazzling Truth Detector is the fourth book in the humorous and imaginative Coin Slot Chronicles series by New York Times bestselling author, former NFL running back, and Dancing with the Stars champion Rashad Jennings.

▼▲
I'm the author/artist and I want to review Arcade and the Dazzling Truth Detector.
Back
×