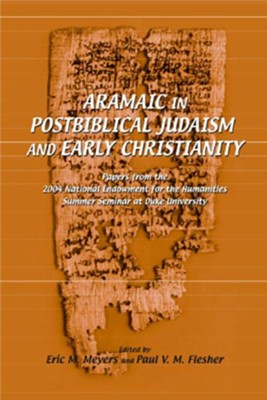 Aramaic in Postbiblical Judaism and Early Christianity: Papers from the 2004 Summer Seminar at Duke University

From the 700s B.C.E. to the late 300s B.C.E., Aramaic was the international language of the ancient Near East. With the arrival of Alexander the Great in the 300s, Greek supplanted Aramaic, but Aramaic did not disappear. Although it gradually broke apart into dialects, in many regions of the former Persian Empire, Aramaic became the lingua franca of peoples in the regions of Palestine, Syria, and Mesopotamia. As a result, a wealth of important works were written in Aramaic and have survived, from apocryphal and rabbinic texts to numerous translations of Scripture (targumim) and liturgical texts, as well as legal documents, letters, and inscriptions. In the decades following the destruction of Jerusalem and its Temple in 70 C.E. and the failure of the Bar Kokhba Revolt in 135, large numbers of Jews migrated from Palestine to Babylonia. One of the three dialects of Aramaic used in Babylonia eventually formed the linguistic basis for the Babylonian Talmud, along with Hebrew.

In Syria and northern Mesopotamia, Aramaic also developed into an important local language called Syriac. As Christianity began to grow, especially after its legalization under Constantine in the fourth century, Syriac took on a new role. While most Christians in the Mediterranean world adopted Latin and/or Greek for religious purposes, those in Syria used Syriac, and it played a major role in the formation of Christianity in the lands nearest its origins during its first millennium. The churches translated Scripture into Syriac, as well as using the language for commentaries, sermons, and liturgical works.

The essays in this fine volume came into being during a six-week residential seminar in the summer of 2004 held at Duke University and directed by the editors. The seminar focused on Aramaic in postbiblical Judaism and early Christianity and was sponsored by the National Endowment for the Humanities. The important essays included here were written as a result of that seminar. Most were written in residence, and all were done in discussion with the seminar’s participants and stellar faculty, which in addition to Eric Meyers and Paul Flesher included Lucas Van Rompay, Michael Sokoloff, Douglas Gropp, Tina Shepardson, and Hayim Lapin. The essays are arranged in engaging three sections: Awakening Sleeping Texts, the Details of Language, and Recasting: Making Old Texts New.

▼▲
I'm the author/artist and I want to review Aramaic in Postbiblical Judaism and Early Christianity: Papers from the 2004 Summer Seminar at Duke University.
Back