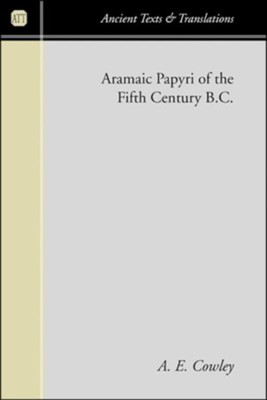 ▼▲
The Aramaic papyri found on the island of Elephantine, Egypt (ancient Yeb, opposite Syene) come from the fifth century BC. They include letters, personal archives, public archives, the 'Words of Ahikar, ' the Behistun inscription, accounts, and lists. Cowley provides here the Aramaic transcriptions and English translations for all the texts available to him. In this edition, an updated bibliography is provided. Some hundred years after the discovery of the first Aramaic papyri almost all the published pieces were brought together in a small volume by one of the main contributors to the decipherment and publication of these texts, A. E. Cowley. For thirty years, until publication of the Brooklyn Museum Aramaic papyri the name of Cowley was virtually synonymous with Aramaic papyri. -Bezalel Porten author of Archives of Elephantine A. E. Cowley (1861-1931) was a Fellow of Magdalen College, Oxford University, and Sub-librarian of the Bodleian Library. Among his other publications is 'The Samaritan Liturgy'; he also edited the English edition of 'Gesenius' Hebrew Grammar.'

▼▲
I'm the author/artist and I want to review Aramaic Papyri of the Fifth Century B.C..
Back