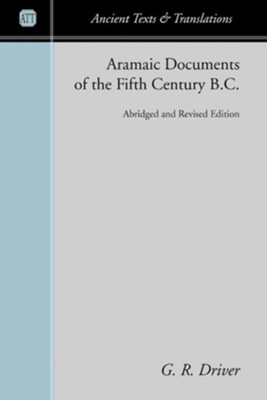 ▼▲
The documents here published are all instructions of an official or semi-official nature issued by the Persian satrap of Egypt or other high-ranking Persian officers to subordinate Persian administrative officers in Egypt; only one contains instructions from the satrap to Persian and Babylonian officers commanding districts on the way from Babylonia to Syria. All are drafted in the form of private letters, but, thanks to the high position of the senders, several of them refer to or are concerned with affairs of considerable public importance. The letters deal for the most part with a single subject, the administration of the domain-lands in Egypt held by highly placed Persian officers and the difficulties arising out of the mutual relations of the local officers of the administration to one another and to the subject population. The problems raised in them are the collection and transport of the revenues of these domains, the assignment of a father's revenues to a son who has succeeded to his office, the transfer of a domain to a deceased tenant's son, a summons to appear before the satrap, measures to be taken for the protection of the satrap's property and for recruiting additional staff for employment on his estate, the release of soldiers wrongfully seized and detained, an order to a negligent officer to carry out his instructions, the reprimand of an officer who has disobeyed an order to assign or transfer some men to another officer and has, moreover, been guilty of robbery, assault and battery, and the punishment of servants or slaves who have robbed the officer in charge of them and run away. --from the Introduction G. R. Driver (1892-1975) was Professor of Semitic Philology at Oxford University. His other works include 'Canaanite Myths and Legends, ' 'Semitic Writing: From Pictograph to Alphabet, ' 'The Assyrian Laws, ' and 'The Babylonian Laws.'

▼▲
I'm the author/artist and I want to review Aramaic Documents of the Fifth Century B.C.Revised Edition.
Back