Skip to main content
Once an Arafat Man: The True Story of How a PLO Sniper Found a New Life - eBook
By: Tass Saada, Dean Merrill
Stock No: WW18674EB 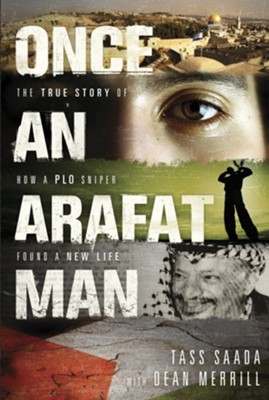 Once an Arafat Man: The True Story of How a PLO Sniper Found a New Life - eBook

▼▲
Tass Saada understands terrorists. He understands their passion and devotion to their cause. How? He was one. Becoming a sniper for the PLO at 17 years old, he personally worked for Yasser Arafat, even becoming his chauffeur. In Once an Arafat Man, Saada tells his incredible story of his early fascination and association with the PLO cause and how he eventually risked his life by becoming a Christian.

Saada moved around the Middle East with his family as a refugee during his youth, but he found ways to continue his terrorist indoctrination, even getting accepted into a PLO training camp. He finally arrived in America, despite his fathers objections of going to that satanic country. While living with a friend in Columbia, Missouri, Saada decided to stay in the United States, but he didnt have the proper documentation. He realized he could stay if he married an American, so he met a girl and accomplished his goal. He planned to leave her, but a pregnancy changed his mind and he decided he would make the marriage work.

He developed a blossoming career as a chef, leaving his wife and children in Missouri to take a job in California. His career began to quickly unravel, and he returned to his family. His amazing salvation story is the turning point in the book and is a wonderful testimony to Gods grace, proving that if anyone is in Christ, he is a new creation; the old has gone, the new has come (2 Corinthians 5:15). It also put his life in peril with his own family for rejecting his Muslim faith.

Saada eventually had the opportunity to visit with Arafat privately and told him of his new relationship with God. He and his wife founded and operate Hope for Ishmael, a foundation aiming to reconcile Arabs and Jews.

Saadas exciting story powerfully demonstrates how God can change the heart of a man full of hate to a heart full of love and compassion. -- Jeff Friend, www.ChristianBookPreviews.com

▼▲
I'm the author/artist and I want to review Once an Arafat Man: The True Story of How a PLO Sniper Found a New Life - eBook.
Back
Back