Skip to main content
SPRING CYBER EVENT STARTS NOW: And it's a really BIG deal! Up to 88% off through 5/24>
Aquinas on the Divine Ideas as Exemplar Causes
By: Gregory T. Doolan
Stock No: WW227161 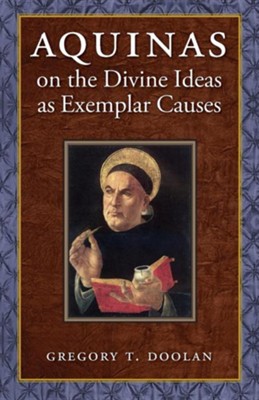 Aquinas on the Divine Ideas as Exemplar Causes

▼▲
Gregory T. Doolan provides here the first detailed consideration of the divine ideas as causal principles. He examines Thomas Aquinas's philosophical doctrine of the divine ideas and convincingly argues that it is an essential element of his metaphysics. According to Thomas, the ideas in the mind of God are not only principles of his knowledge, but they are productive principles as well. In this role, God's ideas act as exemplars for things that he creates. As Doolan shows, this theory of exemplarism is an integral part of Thomas's account of the existence and order of the created universe. It also accounts in part for the freedom of God's creative act. The volume begins with an introduction to Thomas's doctrine of exemplarism and then addresses his arguments for the existence of exemplar ideas within the mind of God. Having established the existence of divine ideas, Doolan considers how Thomas reconciles their multiplicity with God's simplicity. The work identifies the various things for which Thomas posits divine ideas. As Doolan is careful to show, Thomas does not consider all of these ideas to be exemplars because not all of them act as causal principles. After identifying the ideas that do act in this way, Doolan considers how such exemplars can be causes of natural things without compromising the causality of natural agents. The volume culminates with a consideration of the role that the divine ideas play within the structure of Thomas's theory of participation. ABOUT THE AUTHOR: Gregory T. Doolan, assistant professor of philosophy at The Catholic University of America, is a contributor to Wisdom's Apprentice: Thomistic Essays in Honor of Lawrence Dewan, O.P., and Reassessing the Liberal State: Reading Maritain's Man and the State. This is his first book.

▼▲
I'm the author/artist and I want to review Aquinas on the Divine Ideas as Exemplar Causes.
Back
Back