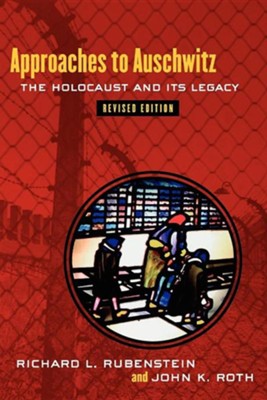 Approaches to Auschwitz: The Holocaust and Its Legacy, Revised Edition

▼▲
The Nazi attempt to exterminate the Jews of Europe in the 1940s is an event that staggered the history of the world and left an atrocious scar that will never disappear. Four decades later, the human concerns of this catastrophe remain intense.

For the first time a Christian and a Jew have collaborated to create a powerful, monumental work that explores the historical process that produced the Holocaust. They develop an analysis of the historical roots of the Holocaust, its rudimentary character in human civilization, and its unparalleled importance in determining what the fate of the world will be.

Distinctively coauthored by a Christian scholar and a Jewish scholar, this monumental, interdisciplinary study explores the various ways in which the Holocaust has been studied and assesses its continuing significance. The authors develop an analysis of the Holocaust's historical roots, its shattering impact on human civilization, and its decisive importance in determining the fate of the world. This revised edition takes into account developments in Holocaust studies since the first edition was published.

▼▲
Richard L. Rubenstein is President Emeritus and Distinguished Professor of Religion at the University of Bridgeport, Connecticut, where he also serves as Director of the University's Center for Holocaust and Genocide Studies. An internationally recognized historian of religion, he previously served as Distinguished Professor of Religion at Florida State University, where the Richard L. Rubenstein Chair for Religious Studies was created in his honor. John K. Roth is Edward J. Sexton Professor Emeritus of Philosophy and the Founding Director of the Center for the Study of the Holocaust, Genocide, and Human Rights at Claremont McKenna College in Claremont, California, where he taught from 1966 through 2006. In addition to service on the United States Holocaust Memorial Council and on the editorial board for Holocaust and Genocide Studies, he has published hundreds of articles and reviews and authored, coauthored, or edited more than forty books. In 1988, he was named U.S. National Professor of the Year by the Council for Advancement and Support of Education and the Carnegie Foundation for the Advancement of Teaching.

▼▲
I'm the author/artist and I want to review Approaches to Auschwitz: The Holocaust and Its Legacy, Revised Edition.
Back
×
Back
×