Skip to main content
SPRING CYBER EVENT STARTS NOW: And it's a really BIG deal! Up to 88% off through 5/24>
Appointment In Jerusalem: A True Story of Faith, Love, and the Miraculous Power of Prayer - eBook
By: Derek Prince, Lydia Prince
Stock No: WW45496EB 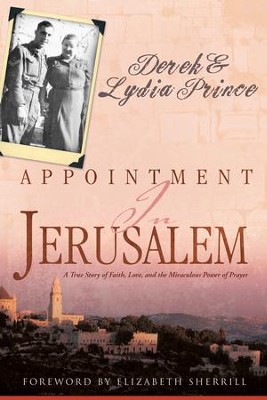 Appointment In Jerusalem: A True Story of Faith, Love, and the Miraculous Power of Prayer - eBook

▼▲
This is the riveting true story of a young schoolteacher and her courageous quest to know God’s will for her life. In Lydia Prince’s search for God and her life’s purpose, she is led to Jerusalem, where she learns the power of prayer and experiences many miracles of provision and protection.

Lydia rescues a dying baby girl and then miraculously survives many dangers, including gunfire, siege, and barricades. She enters into her true appointment from God and, in the process, rescues scores of abandoned sick and orphaned children from disease and death.

Follow Lydia’s astounding journey and see how you, too, can:

Discover how God can remarkably use those who trust Him!

▼▲
Bible scholar and spiritual patriarch Derek Prince (1915–2003) was educated as a scholar of classical languages at Eton College and Cambridge University in England, and later at Hebrew University in Israel. While serving with the Royal Army Medical Corps (RAMC) in World War II, he began to study the Bible as a philosophical work and, as a result, experienced a life-changing encounter with Jesus Christ. Derek Prince taught and ministered on six continents for more than sixty years, imparting God’s revealed truth, praying for the sick, and sharing his prophetic insights. He is the author of more than eighty books, six hundred audio teachings, and one hundred video teachings, many of which have been translated and published in more than one hundred languages. Prince pioneered teaching on such groundbreaking themes as generational curses, the biblical significance of Israel, and demonology. Derek Prince Ministries, with its international headquarters in Charlotte, North Carolina, carries on the good work that God began in and through him. // Derekprince.org Facebook.com/dpmlegacy Twitter @DPMUSA

Lydia Christensen Prince served nearly fifty years of ministry around the world. She was a pioneer in the field of home economics and a highly regarded teacher in Denmark. Following her commitment to Christ, she moved to Jerusalem, where she ran a home for orphaned and abandoned Jewish and Arab children and adopted eight girls. After her marriage, she and Derek Prince lived and served in Jerusalem, England, Kenya (where they adopted their ninth daughter), Canada, and the United States. After settling in Fort Lauderdale, Florida, they taught and ministered together internationally.

▼▲
It was my great privilege to know Derek and Lydia Prince for many years. Lydia Prince was a lover of Israel, a compassionate and tender woman who adopted nine daughters and whose demeanor was as bold as a lioness. On one occasion, when I was visiting Lydia and Derek in Florida, Lydia asked me if I would like some tea. I responded, "Yes, I would love some ice tea." Lydia, who was Danish, looked straight at me and responded, "In my home we do not boil water and then mix it with ice to make it cold; we do not add sugar and then fill it full of lemons. We have hot tea, if you would like some." I responded, "I would love to have some hot tea." She smiled, left the room, and minutes later produced the hot tea. When Derek was ministering in my church, Lydia sat on the front row like a five-star general. One woman before service asked Lydia, "How are your children?" Lydia responded, "Do you really want to know?" The woman was trapped. "Yes, I would love to hear about your children." Lydia took her by the hand and sat her down on the pew beside her for a forty-five-minute review of how and where her nine daughters were doing. That was Lydia. She and Derek are in heaven today walking the streets of the New Jerusalem, looking down on ancient Jerusalem in Israel, knowing that soon we shall all be there together.
-John Hagee, Senior Pastor, Cornerstone Church, San Antonio, Texas

I was overwhelmed by the dramatic power of Appointment in Jerusalem. Lydia struck me as one of the truly authentic modern heroines. Few women have ever demonstrated such courage, compassion, and commitment. This combination of wartime
struggle, family separation, and love between a mature woman, Lydia, and the younger man, Derek Prince, gives Appointment in Jerusalem a broad international appeal. The story made me smile, cry, and applaud.
-Al Kasha, Two-time Academy-Award-winning Composer, Author, and Minister

Derek and Lydia Prince mentored many young believers who came to faith during the Jesus Movement, including my wife Susan and me. The special way this book captures and presents Lydia Christensen Prince’s heroic and pioneering faith had a galvanizing and lasting influence in our lives. We pray that this anniversary edition impacts thousands of young believers in a similar way today.
-Gary P. Bergel, President, Intercessors for America

There are two books which have profoundly affected my spiritual walk. The first was The Hiding Place, the second Appointment in Jerusalem. Lydia’s intimate relationship with Jesus, the way she was led by the Holy Spirit, her devotion to prayer, her sacrifices, and her walk by faith were awe-inspiring. It is a life-changing book.
-Ann Perdue, Film Producer, The Brightlight Foundation

This true, heartwarming story of a valiant single woman, who gave up everything to be obedient to the call of God on her life, will inspire and challenge anyone who reads it. Lydia Prince was my mentor and my friend. I can recommend this
book to young and old without any reservations.
-Mrs. Alice Basham, Wife of the late Don Basham, Pastor, Author, and International Speaker

▼▲
I'm the author/artist and I want to review Appointment In Jerusalem: A True Story of Faith, Love, and the Miraculous Power of Prayer - eBook.
Back
Back