Skip to main content
Now is the Appointed Time: Philosophical and Theological Perspectives on the Necessity For Reform in the Roman Catholic Church - eBook
By: Carmen J. Calvanese
Stock No: WW111317EB 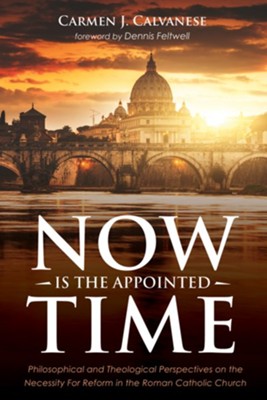 Now is the Appointed Time: Philosophical and Theological Perspectives on the Necessity For Reform in the Roman Catholic Church - eBook

▼▲
The necessity for meaningful change and reform in the Roman Catholic Church is not just the opinion of the few but a consensus of the many. It is no secret; many Catholics today are discontent with the leadership of the church. The once bastion of the faithful are steadily drifting away from Catholicism, some for personal reasons, but the majority of Catholics that have moved on to other denominations or none at all are those who have become disillusioned and disenchanted by the controlling forces of leadership. That is the hierarchy that has failed to modernize the church by bringing its practices and ways of being church into the twenty-first century--especially the leadership that has insufficiently addressed the causes and remedies of the scandalous abuses of pedophile priests. It appears by most accounts that the leadership of the church has not been able to recognize the signs of the times. It is rather obvious; we live in a troubled world, acculturated by sex, greed, violence, and power. These self-destructive futilities grow from the seeds of obsession in the existence of the many. Therefore, reforms are absolutely essential to ensure that Catholicism has a future in the world.

▼▲
Carmen J. Calvanese is an adjunct professor at Saint Joseph's University, La Salle University. In addition to writing and research, teaching is his passion. Calvanese claims that his pedagogical philosophy is centered on students with the deep desire to excel and achieve; for once a mind is stretched, it never returns to its original form.

▼▲
I'm the author/artist and I want to review Now is the Appointed Time: Philosophical and Theological Perspectives on the Necessity For Reform in the Roman Catholic Church - eBook.
Back
Back