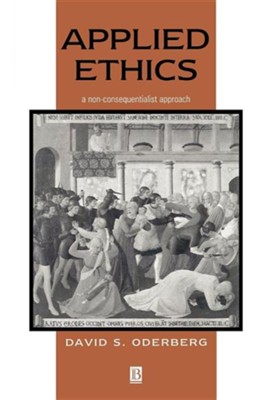 ▼▲
Applied Ethics focuses the central concepts of traditional morality - rights, justice, the good, virtue, and the fundamental value of human life - on a number of pressing contemporary problems, including abortion, euthanasia, animals, capital punishment, and war.

▼▲
David S. Oderberg is Lecturer in Philosophy at the University of Reading. A graduate of the Universities of Melbourne and Oxford, he is author of The Metaphysics of Identity over Time (1993); co-editor, with Jacqueline A. Laing, of Human Lives: Critical Essays on Consequentialist Bioethics (1997), and editor of Form and Matter: Themes in Contemporary Metaphysics (Blackwell, 1999).


"It is a robust and uncompromising defence of traditional values." Stuart Reid, The Spectator, 25th November 2000

"Not the least merit of Oderberg's treatment of [the themes in Applied Ethics] is attention to the detail of realistic cases. This is casuistry in the true sense, designed to reveal and develop the lineaments of our actual moral thinking..." Anthony O'Hear, Salisbury Review

"Oderberg's discussion of [the] issues is rich and thought provoking. [The] work is, even for non-believers, an important and engaging statement of non-consequentialist moral theory" Kaspar Lippert-Rasmussen, The Philosophical Quarterly, vol. 51, no. 204, July 2001

"...very carefully written work that contributes to the diversification of literature available for bioethical formation and which intervenes critically in the ongoing bioethical debate in western societies." Medicine, Health Care and Philosophy, Vol. 6, 2003

▼▲
I'm the author/artist and I want to review Applied Ethics.
Back